As I mentioned back in August, I’m heading to Richardson Farms in early December for Illinois’s muzzleloader season. Well, my... 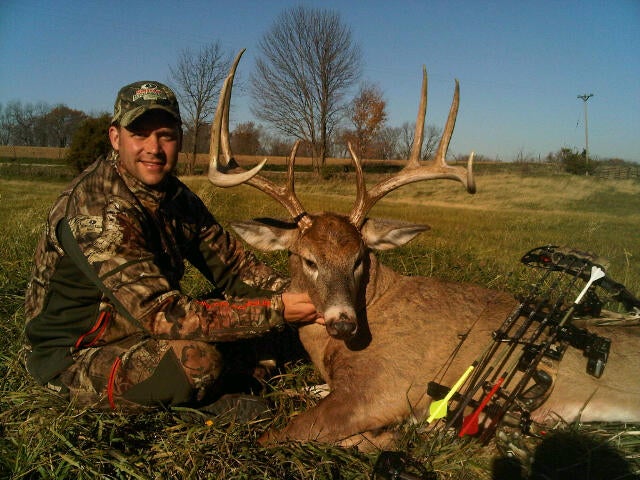 As I mentioned back in August, I’m heading to Richardson Farms in early December for Illinois’s muzzleloader season.

Well, my buddy Ben Maki, with Mossy Oak, was hunting Tim Richardson’s place this past weekend, and despite unseasonably warm temperatures (we seem to be hearing that from a lot of guys all over the country), he was able to kill the awesome buck you see here on Monday night. I’ll let Ben tell the story:

“It was a very cool hunt, among my most memorable. It was an afternoon sit on the edge of a cut corn field. I could hear deer chasing, grunting and carrying on in the valley below me, but I couldn’t see them. About an hour before dark I see this guy steadily walking across the cut corn field, heading away from me at 250 yards. He was skylined and looked a mile wide but I figured he was heading out of there. As a hail mary, I banged the rattling horns together to see if he’d pay any attention. He did. He came straight at me on a dead run, and I barely had time to get my bow ready before he was there. He stopped at 40 yards and turned broadside and I drilled him. Still can’t believe it went down that way. The whole encounter lasted maybe 20 seconds. Pretty cool. He grossed 152 and was 22 in. inside.

“You guys should have an awesome trip–lots of encounters with big ones this week that wouldn’t have made it past a muzzleloader.”

The more I look at Ben’s buck, the more I wonder if it’s this deer, captured on a trail cam in August.

Regardless, I didn’t think I could be any more excited about my hunt … until I got Ben’s email this morning.