It’s fitting, somehow. After logging 32 days in blind, tree stand, irrigation ditch or hunkered down on the edge of... 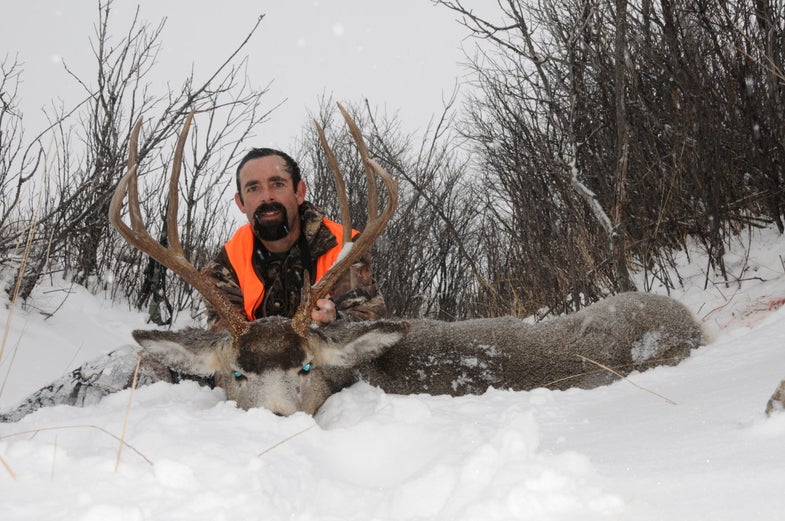 It’s fitting, somehow. After logging 32 days in blind, tree stand, irrigation ditch or hunkered down on the edge of an alfalfa field since early September. After passing on hundreds of bucks. After second-guessing on my decision to let some of these deer walk. After being consumed with whitetails, I finally punched my Montana deer tag last evening, in the final hours of the 2010 hunting season.

And it’s fitting — and uber-ironic — that the deer I ended up killing is not one I’ve seen before. In fact, it’s not even a whitetail.

But in this season, when nothing went according to script, this was a hunt that had everything: suspense, drama, intensity, and unlike a whitetail hunt, plenty of physicality.

THE MORNING
Sunday was the final day of this year’s rifle season, and I invited a friend and his young daughter to hunt my river-point fields. Abby was interested in filling a doe tag, and her dad Steve wanted a place where variables of distance and shot selection could be controlled. So I put them in an irrigation ditch where deer would walk past on their way from feed to bed.

Meanwhile, I headed to a distant part of the field where I had been seeing a great buck–a heavy 4×4 or possible 5×5 that I figured would score in the 170-class. Before we parted, we made sure where each of us would be and talked about shooting lanes, shot selection and being safe.

I had barely gotten settled when I saw a small herd of deer walking the timber edge about 80 yards away. I put my Zeiss bino on them and spotted the big buck, just waltzing along with a harem of does. He was 80 yards away and I could see his rack against the fresh snow. The problem: it was still 20 minutes before legal shooting light. So I had to let him walk. I watched him bed down, though, in a corner of the field, just as I noticed two trespassers sitting inside the fence, watching the same buck.

Once legal light arrived, and I couldn’t see the buck, I rose to approach the trespassers. But they saw me coming and slinked back over the fence. I stopped. I didn’t want to push that buck to these jerks. I was just settling back against a tree when I heard a rifle crack. Turns out it was a neighbor, shooting in the very direction of Abby!

Too many people and bad behavior for my blood, so after the morning’s activity I headed to a different part of our ranch. The great thing about a Montana deer tag is that it’s valid for either mule deer or whitetails, depending on the hunting district. I headed to a place on our land where big post-rut whitetails will sometimes bed. I needed a head-clearing walk, and besides, there are often mule deer in this place, and I had a muley doe tag to fill.

THE MID-DAY
I hadn’t walked long when I spotted some mule deer bedded down. Two modest-sized bucks were with a harem of does, but I wasn’t interested in them so I circled way around and headed to another herd of grazing deer. I had to cross a creek to reach them, and here was my first brush with disaster. The slick snow and steep banks were impossible to navigate, so I slid down the bank. Right onto the thin ice of a beaver dam. I fell through, up to my waist in the icy water.

After crawling out, ensuring that my gun and optics were OK, I continued my stalk. There was a great buck in this second herd, but from a half-mile away he looked funny. Tall, a little spindly, but with beams jutting straight up off the main frame like a whitetail, not the forking beams of a mule deer.

After two busted stalks, I finally got a shot at this deer. Longer than I wanted, but two does spooked and got the buck on his feet, milling in some scattered timber. My first two shots missed, but I thought I connected on the third, at something over 400 yards. The buck kicked his back legs and took off running, apparently unharmed.

But my instincts said otherwise, and I decided to intersect his escape route to see if I spotted blood. After a half-mile slog through the snow, I looked down. Deer tracks. And copious amounts of blood. Heading back toward the creek.

THE CHASE
I followed the blood trail to the creek and looked down. The buck had crossed, after breaking through the thin ice and pulling himself out. He must not be hurt badly to pull off that feat, I thought, but the amount of blood indicated that he had holes in either side and a mix of pink lung blood and dark-red arterial blood indicated a rear-lung shot, and maybe a nicked liver.

I made a rickety bridge of tree limbs and managed to get across the creek without busting the ice. But remember, I’m in my whitetail clothes: fleece bibs, rubber boots. I’m dressed for sitting still, not hiking. The blood trail led me out of the creek bottom and up the steep coulees.

The blood continued, but by now a fresh snow is falling so fast that I have to run to keep the track fresh. After about a mile of sweat and chest heaving, I notice that one of the buck’s feet is starting to trail, and that distinctive track keeps me on him even after the blood trail gets covered up by new snowfall.

By now he’s gone nearly 1.5 miles. We’re still on my own land, but I’m wondering how long he–and I–can keep this up.

Finally, after a 2-mile chase, I peek over a ridge and see something in the brush. It’s the buck, on his feet but wavering like he’s drunk. He’s done, but I put a bullet in him to finish what I started two hours earlier.

When I dress him, I find the original hit: high and back. There’s a gaping hole all the way through his back, just under his spine and backstraps. I have hit a lobe of one lung. How could he go this far with this sort of mortal injury? I sit with the buck for several minutes, apologizing for his agony but marveling at his stamina.

THE FINISH
I call my wife. I had promised the kids that we would see the new Harry Potter movie at 4 p.m. It’s already 2:30 and I’m a solid mile from my pickup. Would my wife come join me, bring the kids and my big ice-fishing sled, plus some rope? I start dragging the deer toward the creek.

The family finally arrives and together we haul the deer out of the prairie. We get to the movie with 5 minutes to spare. I’m so tired and hungry–I haven’t had any food or water all day–that I barely remember the movie. Only that I ate more than my share of popcorn.

THE BUCK
The buck himself is a strange creature. For starters, his testicles were entirely metastasized, a hard, cancerous wad of tissue. Then there’s his rack. He has six points on one side, including a brow tine, but is a clean 3-pointer on the other side. He is tall — 13-inch G-1s — and has a great frame. He looks like a big Texas whitetail, but he is obviously a mule deer, though probably a whitetail/muley hybrid. He’ll score somewhere in the 160 class.

He’s my Record Quest buck for Montana. Not exactly the classic bottomland whitetail I imagined, and which I have hunted for more than a month. But a whale of a buck. And one that provided a hunt that I’ll remember every time I see his funky antlers.