If you haven’t seen it this week, you will. It’s the distinctive lip curl of a rutting buck. Maybe it’s... 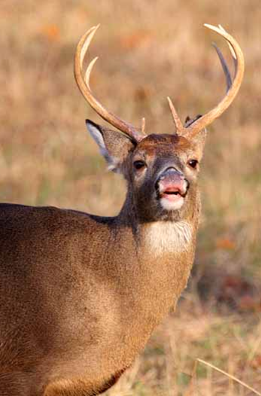 If you haven’t seen it this week, you will. It’s the distinctive lip curl of a rutting buck. Maybe it’s a gargantuan whitetail. Maybe it’s a puny mule deer.

Whatever. This is the week you’re going to see what’s called in academic circles the “Flehmen Response,” after a German biologist who first noted the behavior.

You’ve seen it, whether you knew it by its formal name or not. It’s the distinctive lip curl of a lovestruck buck.

For the next two weeks, those of you who are out there amongst rutting deer will see plenty of this, the peculiar behavior of deer in which they draw back their lips so that they look like they’re smirking or grimacing.

The behavior has a very specific function: it allows animals (mostly bucks, this season) to better detect scent. You’d call this sniffing, the way bucks approach does from behind and then turn their noses to the sky and curl their lips in this Flehmen response. They’re checking to see if the does are in estrus, or in heat, and ready to breed.

Physiologically, what’s happening is fascinating. The curled lip helps the animal expose the vomeronasal organ in the roofs of their mouth. They’re actually sucking air across this organ, which is so sensitive that it can pick up individual molecules of scent.

That’s great if you’re a love-struck buck. But you may also see does do this. And when your wind is in their direction, that’s a bad sign. It means they’re smelling you, and they’re about to bust.