Day One in Kansas

For opening day here in western Kansas I was sitting with my back against a corner fence post overlooking a... 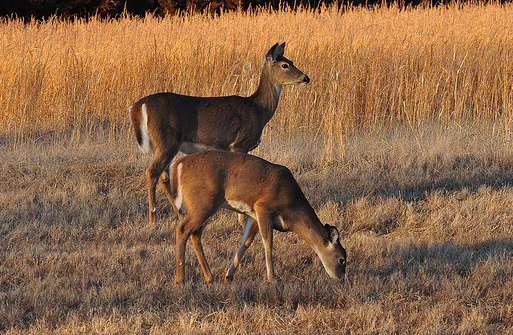 For opening day here in western Kansas I was sitting with my back against a corner fence post overlooking a draw that connected two wheat fields. As soon as it got light I could see deer–lots of deer–far out in the field feeding.

I had a sizeable patch of knee high weeds in front of me acting as a natural blind to shield me from the eyes of the whitetails as they grazed on the young sprouts of winter wheat.

Far off in the mirage of my binocular I watched some bucks that were intermingled with the does. There was one giant buck way off, so far out that I couldn’t make out any points on his head, but I could tell just by the sweep of white above his head that he was a monster.

A group of does suddenly appeared right on the other side of my patch of weeds. The farmland out here looks as flat as a pool table and it doesn’t seem as though deer could pop out of nowhere but there are enough depressions, ditches and tall grass in this country to hide an army of whitetails.

More deer arrived. I could hear, but not see, a bunch of whitetails in the weeds right in front of me. Pretty soon they popped out on my side, standing not more than 30 feet from me. The wind was in my face and I sat still and for the next half hour I listened to the six does and fawns around me chew their breakfast. At one point they fed within 15 feet of me and I thought I’d end up with a whitetail in my lap.

Three bucks showed up–all young handsome 8-pointers and worked from the field in front of me into the thicker cover that was at my back.

I finally spooked the does away–sort of–when a mule deer buck showed up about 80 yards away. He had small forks up front and because I wasn’t expecting a mulie I thought for a moment that my shooter whitetail had arrived. I had to raise my binocular to check him out, which caused the does to snort and back off about 25 yards. Then they went back to feeding. These were about the most relaxed whitetails I’ve ever been around.

Eventually, the deer all moved off to bed down. I never was bored though. After they left a pile of pheasants flew into my weed patch and I watch two ringneck roosters try to spur each other into submission.

The pheasants flew off right as the hawks came. A harrier came in low, hunting over my weeds, diving down into the grass with a suddenness that takes your breath. Whatever he was after was swifter than he was, though, and he came up with empty talons. He decided to alight on the ground not to far from me and I was admiring his plumage in my binocular when he began frantically beating his wings to take off. He got about 6 feet off the ground when a falcon came in and knocked him on his head, as if to say, this is my turf buddy.

Both birds flew off their separate ways, the harrier with an empty belly and a sore head.