Day One in Texas

You know you’re in Texas when the pre-dawn planning includes this advisory from the outfitter: “The first feeder goes off... 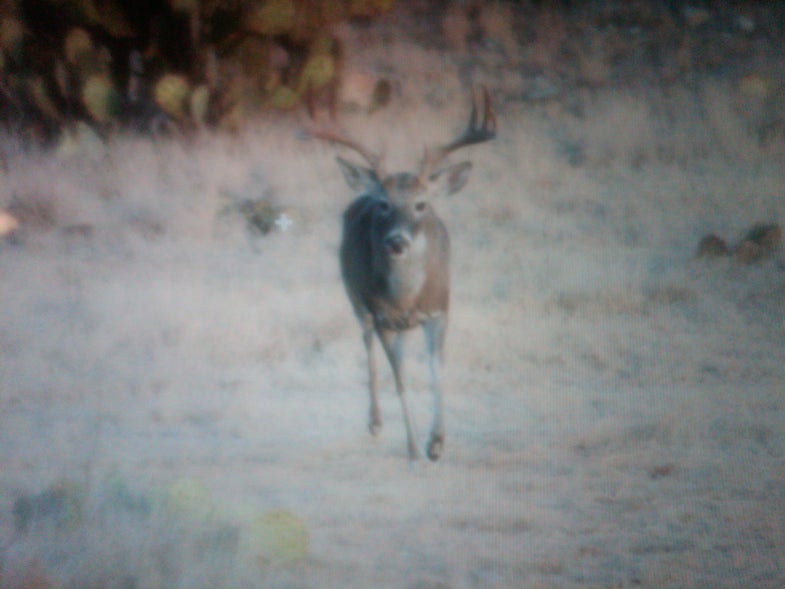 You know you’re in Texas when the pre-dawn planning includes this advisory from the outfitter: “The first feeder goes off at 7.”

The second indication is in the box blind, when my partner, videographer and native Texan Darrin Abate, turns over his plastic chair and scans the underside with his flashlight.

“Brown recluse check,” he says. I’m left wondering if I should do the same or if I should act nonchalant and ignore the obvious risk that a flesh-eating spider bite may compromise my ability to sit down the rest of my life.

I decide to take the risk. I’m too excited to be hunting West Texas’ big whitetails to be distracted by poisonous arachnids.

I’m hunting Vatoville Ranch, owned by Steve and Michelle Anderson and located somewhere outside Eldorado, Texas. This is cool country, a mix of live oaks and juniper, cactus and limestone. And it’s full of whitetails. Even before shooting light the area around the blind was churning with deer, and in the first hour I had five bucks working the does that came for their handout of corn.

I’m limited to “management” bucks here, older 8-points (I’d call them 4×4’s back home). These are the bucks that probably won’t ascend to 10-pointers, and Steve wants them taken out. I’m happy to oblige.

Or I was, anyway, until a stunning 5×5 waltzed into my shooting lane. This is the buck of the year. He has it all: crazy spread, good mass, good tine length, and a main beam that is long and thick as irrigation pipe.

Unfortunately, I can’t shoot him, so I resign myself to taking his picture. I’m thinking he’s a mid-160-class buck. But then my scale gets recalibrated. Back at the ranch house, I inspect a couple does that other hunters have killed. My Lab is bigger than these deer. So how big was the body of that big 5×5?

“Our mature bucks will dress out at 120 pounds, on the high side,” says guide John Mayer. “Those are mature does, and they dress out at around 60 or 65 pounds. South Texas has bigger deer, but ours are significantly smaller.”

So that “whopper” buck of this morning? Probably a mid 140’s deer. I’d still shoot him if I had the opportunity, but I’ve been passing up bucks bigger than him all fall. Not everything, it seems, is bigger in Texas.