Down to the Wire in Texas

It’s come down to this: I have a single hour tomorrow morning to kill a Texas buck. I will be... 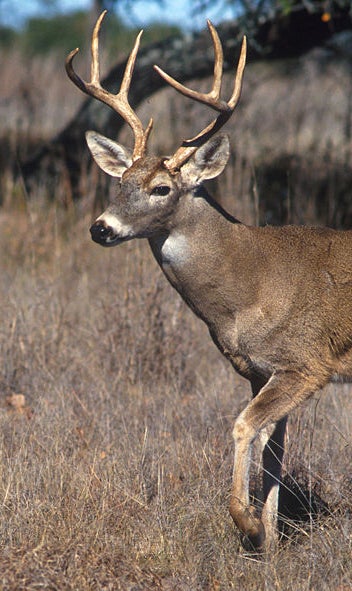 It’s come down to this: I have a single hour tomorrow morning to kill a Texas buck.

I will be sitting in a box blind when the sun comes up at 7, and I have to either throw in the towel or use it to clean my bloody knife by 8 in order to drive to San Angelo for the flight home.

It’s not that I haven’t had opportunity. It’s that I’m not satisfied killing any of the three dozen 115-inch bucks I’ve seen since Tuesday.

I’ve covered ground rattling – and today was epic, with nearly 20 bucks coming to the rattling antlers, sometimes three at a time. I’ve sat on stands at feeders where the guides say I’m guaranteed to see 8-point management bucks upward of 130. But all I’ve seen have been dinks.

Yesterday, ranch owner Steve Anderson, feeling sorry for me, sent me to a stand called “the honey hole.” Lots of deer, including a whopper 8-point with a busted main beam that made him a 4×2, but nothing to shoot.

This morning I was sent to “the sanctuary” that was more like a nursery, full of fawns and juvenile bucks.

Tonight I was sent to a stand that’s been frequented by the biggest buck on the ranch, a tremendous 8-point named “Quevos” that has a stay of execution from Anderson. I was asked to shoot a 140-claS 5×5 if I saw it, a buck that’s been badgering Quevos all fall. I was happy to oblige, but neither of those two big bucks showed. Instead, at the very end of legal light, I picked out the best buck of the lot, a 3×4 with tall tines. I need to shoot a deer and this was as good a candidate as any, a ho-hum 110-incher.

I actually had the safety off twice as I drew down on this buck, and if he hadn’t walked behind a tree just as I was about to shoot I’d be writing a different blog post.

But as it is, my frustration with whitetails continues, giving me one skinny hour in the morning to seal the deal in Texas.