I returned this morning to the same patch of timber in which I hunted all day yesterday, but I was... 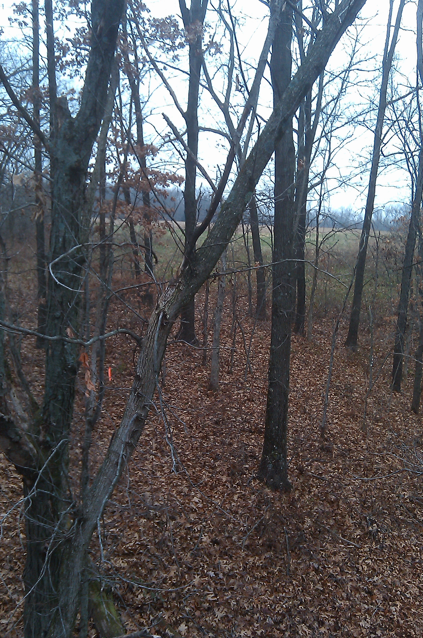 I returned this morning to the same patch of timber in which I hunted all day yesterday, but I was in a stand about a quarter mile to the west of yesterday’s stand.

Last evening, right at dark, a good-sized buck walked within 12 yards of my stand and stood there broadside looking away from me for several seconds. He probably would score in the mid 130s, and looked to be a 3 1/2 year old, but being so close to the end of legal shooting time, and knowing that I still had two full days to try for one of the real monsters west-central Illinois is known for, I let him walk.

So this morning I was anxious to get back into the woods with the hopes that the 130 would be just the first of several mature bucks I’d see before my hunt is over. However, the snow we were supposed to get overnight passed an hour to the north of us, and this morning’s hunt was similar to those of the first two mornings–spotty sightings of does and young bucks–with one exception: the wind.

After two days of near-calm conditions, the wind made up for lost time and started blowing hard out of the north at 9:30 and continues to whip as I type this at 12:30. This afternoon I’m going to sit on the ground overlooking the south side of the woody bottom, near where I saw two bucks cruising on Thursday afternoon.

If I see them or the 130 again, I likely won’t be as hesitant to pull the trigger as I was last night.