I had one last morning to get a buck and opted for a spot and stalk strategy. At dawn, I... 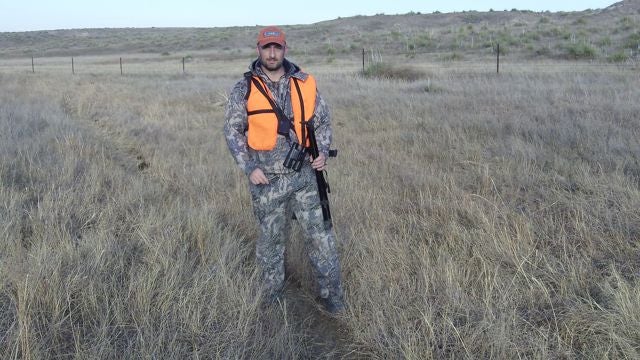 I had one last morning to get a buck and opted for a spot and stalk strategy. At dawn, I was positioned on a bluff overlooking a creek bottom and some alfalfa and hay fields. To either side were some draws and coulees the whitetails liked to lay up in during the day. With the wind blowing into my face the setup looked ideal.

I saw a few deer, including one good looking buck that walked along a far ridge before disappearing into the weeds. I wanted to get a better look at his rack but he didn’t oblige and never reemerged into view.

After an hour of looking at the same small group of deer, I decided to hunt in the draws behind me. I walked through that higher country, stopping to glass the expanses of grass and yucca but didn’t see any deer other than a lone doe and fawn.

I didn’t have a lot of time left, so I decided to do a bit of running and gunning, the idea being to drive around the ranch and glass over the miles of wheat stubble looking for antlers shining white above the cut stalks.

Of course, the country I had been hunting, which seemed so empty, suddenly erupted in whitetails as I got back to the truck. I looked over my shoulder and saw a herd of about 20 deer, including three bucks, staring at me from 350 yards away. I dropped down and even though they had busted me I managed to creep and crawl within range to give them a closer look. None of the bucks were quite shooters, so I moved on.

Driving around I saw dozens of deer at all ranges but none that quite measured up for a stalk. Despite not filling my tag, I would come back to this part of western Kansas to hunt in a heartbeat. All the borderline bucks I had encounters with–and there were a bunch of them–were young deer and clearly had tremendous potential. It just worked out that I never bumped into one of their older brothers, but had I seen a buck 5 1/2 years old or older I’m certain it would have been a stud.