Almost at the very first clash of guide John Mayer’s rattling antlers, we had action. A little buck sprinted to... 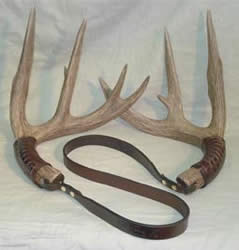 Almost at the very first clash of guide John Mayer’s rattling antlers, we had action. A little buck sprinted to us on a brush-crashing, give-er-hell sprint, all the way to 20 yards before instinct trumped excitement and he reined in and stood before us, trembling with expectation and adrenaline.

He ran away, John rattled again, and another whitetail-this one a solid 4×4-ran in from the opposite direction, closing to 40 yards before he cut our scent and dissolved back in the West Texas cedar and low-slung live oak.

In all, 5 bucks responded to our rattling at this one spot. We crossed the ridge, set up under a cedar, and bashed bone again. I was packing my rifle, scope turned down and ready to make a snap shot. My buddy Mark had his bow for close-in opportunity, and he got his chance less than a minute into the stand. A big-racked 4×5 galloped into view, used a screen of brush to edge closer, and emerged from cover 35 yards out. Mark was already at full draw, and John tickled his antlers’ tines. The buck was drilling us with his eyes, but he believed the sound of fighting phantom bucks, and tiptoed closer, quartering slightly toward Mark.

The buck took one step, then two, and Mark released. The arrow made a bright, beautiful arc… Right over the back of the hastily departing deer.

We all exhaled at once, and I realized we had all been holding our breath.

Two more bucks came to this same set, including a shooter that circled and came to 8 yards, on the wrong side of the cedars.

In all, we rattled in 10 bucks in less than an hour.

This is the way to hunt deer, hard-wired to impulse and reaction, a hard-running, hell-for-leather carnival in which you have split seconds to judge a buck and make a shot.

I’ve never seen bucks so responsive to rattling as these, and here’s why:
* Density: there are more deer on this ranch than rabbits, so many that I’ve been asked to help thin the herd, killing every mature doe I see. The ranch wants to kill 140 does and bucks this season. All those deer mean there are lots of ears to hear the rattling.
* Seasonality: This is still the chase period of the rut, and deer are moving. The bucks without solid romantic opportunities are cycling, covering ground, and are especially vulnerable to rattling.
* Age: I wasn’t able to rattle in a mature buck. It appeals to younger males. As Mayer says, they are obeying the same instinct as college kids at a bar. “When a fight breaks out, everybody wants to watch, even if they don’t want to participate.”
* Timing: It’s best in mid morning, after deer feed but before they bed down. John has his best luck on calm mornings between 8:30 and 9:30.
* Duration: Rattle for a solid minute, breaking branches, scuffing dirt and blowing a grunt tube. Then wait a minute.