How do you tell the difference between a 300-class bull and a 375-inch monster? You look at their fourth point.... 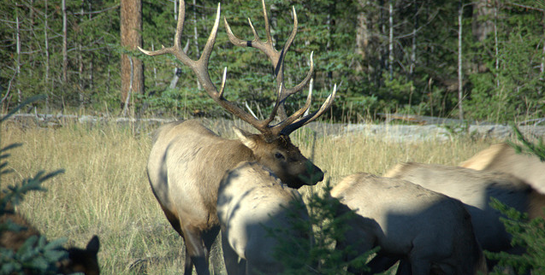 How do you tell the difference between a 300-class bull and a 375-inch monster? You look at their fourth point.

How do you know if you’re looking at a big raghorn or a mature 6-point? You look at the length of his tines. If his brow tine extends well out his nose, he’s a mature bull.

Those are just a few of the excellent tips on field judging bulls provided by the Rocky Mountain Elk Foundation this week.

The tips are well-timed since most archery elk seasons open in less than a month. And they’re especially valuable because they remind us that we rarely have time to fully assess a bull’s dimensions. Contrary to our expectation that we’ll see a bull pose and display on an open ridge or a grassy meadow, most bulls during archery season respond to your calling by using cover to hide their approach. You rarely see all of a rack before you have to decide whether the bull is a shooter or not.

That’s why you want to be familiar with a rack’s anatomy, and what it tells you about the pieces and parts you can’t see. Here are some aspects of elk antlers to consider:

BROW TINE
In Montana, where I do most of my elk hunting, the presence of a brow tine is the definition of a legal bull in many hunting units. This is the first thing I look for. If I can’t see a brow tine, I’m almost certainly not looking for additional features. But if it has a brow tine, I look at its length (as long as its nose, and it’s an old, trophy-class bull) and its mass. If the mass of its base extends well out the brow tine, then it’s probably a 300-plus-inch bull. There is an important disclaimer, though. Once, in the Missouri River Breaks, I spied a huge 6-point and stalked in for a closer look. His right side was massive. But his left rack was nothing but a long, distended brow tine. It looked like a war club. If I had based my assessment of that bull only on the left tine, then I would have ended up with a 200-inch bull, 150 inches on his right and about 50 inches on his left.
**
FOURTH POINT**
If I can’t see any other part of a bull’s rack, I will seek out a glimpse of his fourth point. If it’s long and massive, it’s almost a certainty that he’s a mature bull. Also called the dagger point, the fourth point will imply size and points. As the RMEF correctly notes, if you see only one point above the dagger, then it’s probably a 5-point bull. But if you can see a Y above the dagger, he’s a 6-point, and you can start looking at other features to assess his trophy potential.

MASS
Just as with whitetails, mass contributes mightily to the overall score, but it is the most difficult aspect of a rack to assess in a snap. The thing to note with a bull’s mass is how far out the tine it extends. If an antler is Coke-can massive at the base, and it retains that mass toward its tips, it’s probably an older, trophy-caliber bull.

Will these snap-judging tips inoculate you from experiencing ground-shrinkage as you approach your next bull? Probably not, but if you familiarize yourself with these pieces of a rack, you can have a fair idea of the trophy potential of the bull before you release an arrow or a bullet.