An Internal Debate Before The Arrow Flies

Sometimes, taking your own advice can seem medicinal. You know it’s good for you, but you don’t really want to... 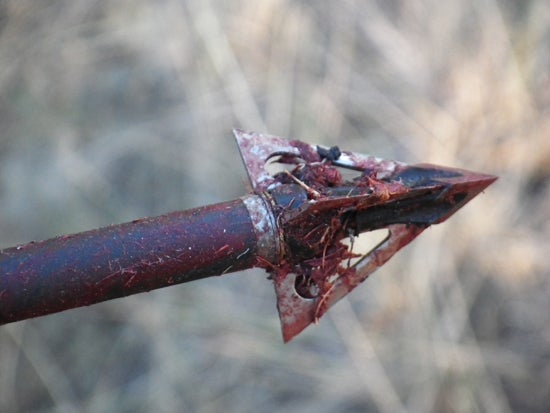 Sometimes, taking your own advice can seem medicinal. You know it’s good for you, but you don’t really want to swallow it. I was thinking that Friday night, looking at a fat cow elk through my bow’s peep sight. I was at full draw and waiting for her to take one more step before triggering my release and sailing a broadhead through her vitals.

My first thought was, “She’s not a bull.” The second thought was “She’s inside 30 yards and doesn’t know I’m here.” Then I thought, “In another three steps she’s going to bust me and take every other elk in this canyon with her — But I don’t see any other elk behind her.”

It went on like this, an angel-and-devil conversation in either ear, for what seemed like 10 minutes. It was probably less than 10 seconds, but whether I would shoot her or not hung in the balance for an eternity. The conversation sounded something like this:

“It’s my last day of archery elk hunting. It’s this cow or nothing.”

“But it’s called ‘Record Quest.’ Do folks really want to read about a trophy cow?”

“Who do I hunt for anyway, me and my family? Or my readers?”

“She’s starting to get nervous. She knows I’m here…”

“If she drops in this canyon, she’ll be in the shade until I can pack her out of here.”

“Yeah, but she’s 5 miles from the pickup, over some nasty country. You remember how bad it was the last time you killed a bull in this hole?”

“You’re tough. You can pack anything.”

“You’re headed to Wyoming next week. You won’t be back here the rest of the season.”

“The rut is just cranking up.”

“It’s archery season. You know the odds. Fewer than 10 percent of bowhunters fill their tags. Be a tag-filler!”

“That EHD epidemic wiped out our whitetails. We’re not going to have much for meat this year.”

“Didn’t say you’d rather shoot a big bull than waste your tag on something small?”

“Yeah, but don’t you tell anybody who will listen that any legal elk on public land is a trophy?”

The cow stepped into the open. I don’t recall punching my release. The elk wheeled back as the arrow penetrated, ran down the trail for 60 yards and then stopped. As I watched, she gushed blood, got wobbly and fell over. I missed Holly’s wedding. My first pack, stuffed with the boned meat of a rear quarter, front shoulder, backstraps and neck, weighed 122 pounds. The second pack went 108 pounds. I’m still nursing bruised hips and sore feet.