Record Quest officially begins Saturday at sunrise, in the maze of badlands and scrub timber of eastern Montana’s Missouri River... 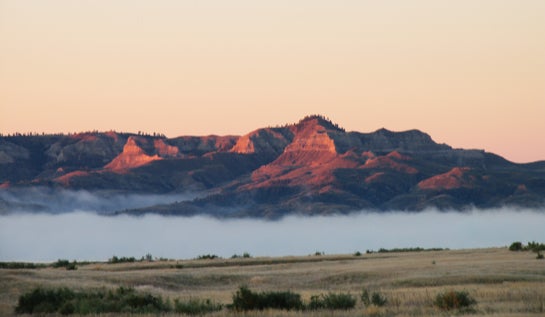 It’s my home country, and I’m hoping that my familiarity from years of hunting bulls and mule deer bucks in it puts me in bow range of a big Montana bull.

I’ve been close a number of times – in fact, the bull in the photo above nearly came home with me a couple of years ago.

I had spotted a herd of about 20 elk feeding on an open slope about five miles from my pickup early one morning. The nature of the Breaks is that you can see forever, but crossing the deep canyons, gumbo knobs and timbered ridges that characterize the country can take hours. In my case, most of the day. By late in the afternoon I finally had worked to within a couple hundred yards of the herd, and found the bull in the photograph bedded down in the shade of a juniper tree.

So far so good, but the wind was swirling, and I couldn’t approach from my initial direction. So I had to drop down a canyon and swing a full mile around to approach them from downwind. By the time I got close the second time the sun had lowered and the bull was on his feet, pushing his harem over the ridge to feed on a north-facing slope. All I’d have to do is wait for all the elk to drop on the other side, then slip over and I should find the bull in bow range.

I waited. I slipped. But when I peered over the edge, the elk were gone. I could smell them, but not a hair or an antler was in view.

You know the rest. The elk hadn’t loitered on the north-facing slope. Instead, they had walked briskly into timber and were brushed up about 100 yards straight downhill. The only way to get close would be to backtrack, then drop into the lower end of the draw where they were feeding and, keeping my body hidden, crawl up the bottom of the drainage right into the herd.

I made it past the first line of cows, but then I rolled a rock, and the cows went from docile grazers to sprinting prey in less time than I can write this. The bull, unsure which way to run, zigged and zagged and followed the herd over the ridge.

I ran after them, but my luck was going as quickly as the setting sun, and I had just enough time to snap this photo before beginning the long hike back to my truck. I followed game trails by moonlight, never once regretting my lack of success. It was a memorable hunt–meatless, but hardly futile.

I’m hoping my latest return to my beloved Breaks ends with a notched tag and a backpack groaning under several loads of bull meat.