You never forget your first monster mule deer. I have forgotten the name of most of my elementary school teachers.... 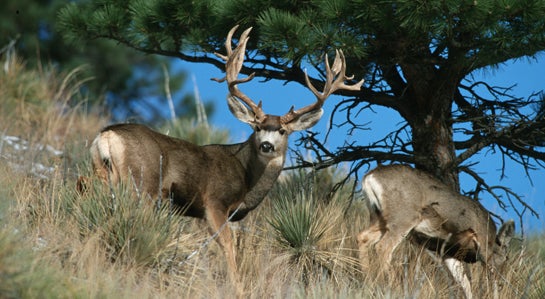 I have forgotten the name of most of my elementary school teachers. I can’t recall the name of the first girl I kissed. But though it was more than 20 years ago, the image of my first trophy mule deer is etched in that part of my cerebellum between long- and short-term memory cells, in a place with nearly instant recall.

I was hunting alone in the jagged rocks and steep slopes just above Montana’s Holter Lake. It was an overcast, gray day and I had a doe tag to fill. But because it was mid November, and because I wasn’t far from the state’s Beartooth Game Range–where buck hunting is limited to a handful of coveted special permits–I kept an eye open for rutting bucks. Maybe that’s why I found myself hiking miles from my pickup, into the inaccessible volcanic reefs and dikes near the top of the mountain range.

I saw the does first, a knot of mule deer feeding across a subalpine basin, their tan pelts matching the cured grass almost exactly, so that the more I focused on the herd with my binocular, the more deer I saw, more than 20 in all. I was calculating the amount of light left in the day, the distance to my pickup, and the amount of effort I was ready to invest in converting the doe to venison when I saw him.

I don’t know how wide the buck was–for reasons that will be obvious momentarily–but my mind’s eye places him in that magical 30-inch realm. He had four points on both sides, bladed brow tines, deep forks all around, and a 12-inch sticker point jagging off his right antler. But the most memorable detail about his massive antlers is how dark they were, almost black, from living all fall on the edge of a large burn at this northern end of the Big Belt Mountains.

He was hazing the group of does, which were feeding directly toward me on the other side of the basin. Had I waited, he would be on my wall. Instead, I got flustered, certain that he would cut my scent and melt into the ring of timber. I rushed the shot, all of 400 yards. Then I emptied my 7mm Magnum as the buck flared and quartered away. The last shot was probably 600 yards, stupid and desperate.

Two decades later, I’m still kicking myself for my haste, selfishness, and my mountainside meltdown.

But I can’t get that buck out of my mind.

Big mule deer are like that, which is why we’re devoting this year’s installment of Record Quest to pursuit of trophy bucks. In blog posts, photo galleries, videos and magazine stories, Outdoor Life is focused on how to find, recognize, and hunt monster mule deer. Part of our focus is selfless: we want you to experience your own heart-quickening encounters with big muley bucks.

But part of the pursuit is selfish: For 20 years I’ve been haunted by that big Beartooth buck, and the only way to erase his image from my mind is to connect with an even bigger specimen.

I hope you come along as we look for him in this year of Record Quest.