Yesterday on Record Quest we showed you video of the former SCI world-record mule deer. Here’s the story of how... 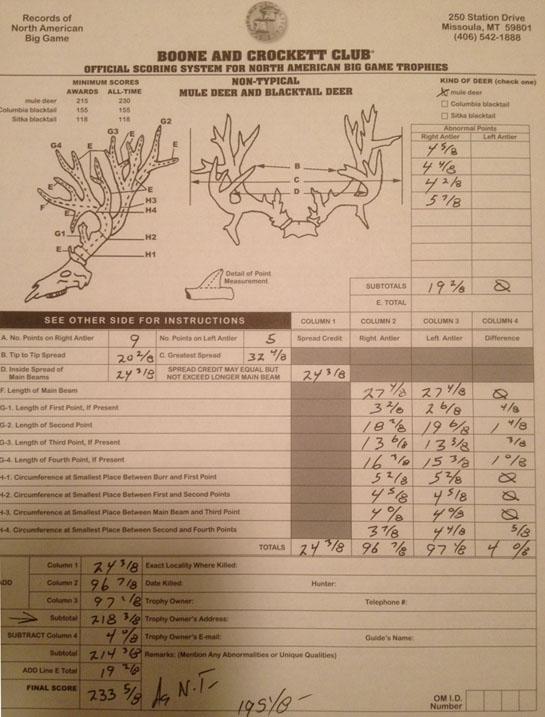 Yesterday on Record Quest we showed you video of the former SCI world-record mule deer. Here’s the story of how that buck was taken …

In October 1986, Matt Arkins was 16 years old, an Arkansas boy on his first hunt out West. He was hunting elk in the San Juan Mountains of southwest Colorado, not far out of Pagosa Springs.

He was with his father, who had put this trip together as a sort of bonding experience, and to give his deer-crazy son a taste of backcountry big-game hunting.

“We were all about elk,” remembers Arkins, now a videographer living in Bozeman, Mont. “We booked with an outfit called Backcountry Outfitters out of Pagosa Springs and the outfitter, David Guilliams, suggested we pick up over-the-counter mule deer tags, because he said, ‘You never know. Every now and then a nice buck comes out of that area.'”

Arkins, who was packing a Winchester Model 70 in .270 Win. topped with a Redfield scope, hunted with Guilliams deep into an area known for its red sandstone rimrocks.

“It was an interesting year,” remembers Arkins. “Everybody was saying that it was the heaviest snowfall for that time of year in 27 years, and there was a bunch of snow. It had pushed a lot of game animals down out of the high country, and we got to a place where my dad went one way and I went the other, looking for elk.”

By afternoon, the snow was falling hard, and Arkins and Guilliams were working a nasty slope of blow-down lodgepole pines.

“I had taken my scope covers off, to be ready in case we jumped something and I needed to take a quick shot,” says Arkins. “But the problem was it was snowing so hard that every few minutes I’d have to clean my scope. I was stopped and was cleaning my scope. After I got the snow off the lenses I put the gun to my shoulder just to make sure I could see through the scope, and there’s a mule deer, right there in my scope. It was like it just instantly appeared in my eye.”

Arkins mentioned the deer to his guide, who threw up his binocular, and immediately grabbed the 16-year-old, nearly throwing him in shooting position.

“I couldn’t see much of the buck,” remembers Arkins. “I could see the tips of three points sticking out to one side, and I remember thinking that he was legal. In that area at that time, there was a 3-point minimum. It could have been a 10-inch-wide buck for all I knew. I didn’t have a great shot, but I figured I could hit him behind the ribs. I guess I wasn’t all that experienced a shooter, because I made a classic “Texas heart shot” on that buck. I put a bullet right through his behind.”

The buck’s rear end dropped, and then the deer turned and started bounding straight downhill.

“I got another shot off, but I was way wide. But the guide was like, ‘Let’s go. You totally missed.’ But I was sure that I had hit it and insisted that we go look for blood where the buck had been standing when I shot. I was sure I had hit. Dave was sure I had missed. We had quite an argument up there on the hill, but finally I went, and I found a few specks of blood. Then we tracked that deer, and you could see in the fresh snow where he had fallen. Then we went around a tree, and there he was, dead, in a three-foot circle of blood.”

The buck sported nine points on its right antler, 5 on its left side, 32-1/2 inches of spread and 19-inch G2 tines. It was, simply put, the largest mule deer anyone in that part of the world had ever seen.

Bank-Vault Buck
Once they got the buck to town, Arkins recalls, “things got interesting.”

“We took it to a taxidermist in Pagosa Springs, and I remember that the whole town just shut down,” says Arkins. “People literally stopped their cars in the middle of the street, got out, and came to look at that buck. Later on, I remember there was a sort of town meeting. People were afraid somebody might break in (to the taxidermist’s studio) and steal the rack, so they actually locked it up in the bank’s vault until the hide was tanned and it was ready to be mounted.”

And scored. The rack was scored by Safari Club International, and officially pegged at 233-5/8 inches according to the Boone and Crockett method. The SCI method didn’t discount non-typical points and measurements.

“It made SCI’s all-time mule deer at the time,” says Arkins. “I received the SCI’s Young Hunter Award, and that rack made the rounds at outdoors shows for a lot of years. I think my buck is ranked number seven now.”

Then the rack stayed in storage, and in his parents’ home in Arkansas.

“My dad said that deer cost him a lot of money, mainly for the insurance that he carried on it. Finally, I took it back. It sits in my closet in Bozeman, now. I have plaster walls and I’m not sure they can hold this mount.”

Arkins is considering donating the mount to a conservation organization that might display it for the public to admire.

And he itches to get back to southwest Colorado, though he’s more interested in killing a record-book bull.