“Why did I shoot?” I asked myself that out-loud as I walked back to the truck. Somewhere behind me was … Continued 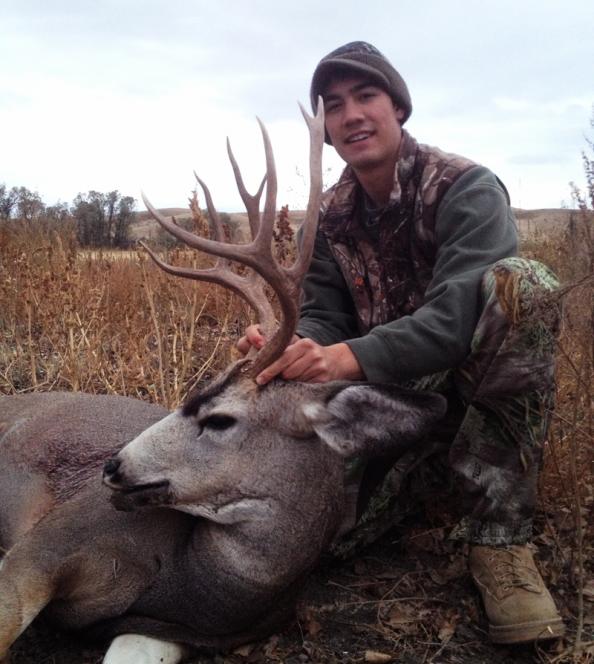 I asked myself that out-loud as I walked back to the truck. Somewhere behind me was my arrow covered in blood and green bile — I stuck it in the ground to mark the spot where I had found the last three tiny drops of red on the brown grass a good 250 yards from where I had taken the shot. And somewhere out there in the creek bottoms or hills was a 4×4 mule deer buck with a hole through his guts.

It was the third day of my very first mule deer hunt.

I replayed the morning’s events in my head: The deer started trickling out of the alfalfa field at 8 a.m. just like I had seen them do the morning before. Soon, three does and a buck made their way past my hide in a thin finger of cottonwood trees. I drew back just before the buck walked into my shooting lane, but the does busted me and the little herd scattered. The buck trotted from 15 yards to 20, then to 30 yards and then to 40. He stopped, turned broadside, I leveled my 40-yard pin and shot. Perfect.

Except that he didn’t stop and turn broadside at 40 yards. According to my rangefinder, the deer actually stopped at about 50 yards. The evidence on my arrow confirmed it: the shot was low and too far back. I followed what little blood I could find for a few hundred yards, did some small circles and then lost the trail.

Now I was hiking out to the truck and talking to myself. “Why did I shoot?”

The plan was to let the buck bed down. I met up with OL’s Editor (and my boss) Andrew McKean, who had invited me out hunt mule deer on his property in north-central Montana. We would do some work at his office in town, let the buck stiffen up, and then go back and try to find him in the afternoon.

I stared blankly at my computer screen for about four hours.

Finally, we hiked back to the spot where the blood trail stopped. I made a large circle hoping to cut a blood trail or spot the bedded buck. McKean posted up at the bend of a creek bottom to make sure I didn’t bump the buck into oblivion.

When that failed, he went upstream and I went downstream to find where the buck had crossed the creek. Before long, McKean found a good splatter of dark blood in the dried-up creek bottom. We zeroed in on where the deer had crossed and followed his trail along the edge of the bank.

It’s a strange mix of emotions that otherwise level-headed hunters race through while trailing a gut-shot animal. It’s a mix of self-loathing, regret, shame, and hopefulness. Enough of this cocktail will make you want to quit hunting.

So, we followed the blood trail the best we could for the next few hours. McKean stayed on the blood while I snuck ahead looking for the glimpse of an ear or antler. We would find some good blood and then it would disappear and we’d have to jump ahead up the trail and search for more.

And then, with the sun beginning to dip on the horizon and storm clouds gathering in the distance, the blood ran out. We checked the bottom of the creek, crossed it and checked the opposite bank, circled out into the sagebrush, and jumped way ahead and circled back. Nothing.

McKean decided we should strike out in the direction we thought the buck was headed and hopefully find him dead or bump him before we ran out of light. I headed farther up the creek and he ranged out into the sagebrush.

In a few minutes he whistled me over. Somehow, McKean had spotted a white clump next to a small stand of cottonwoods. As I approached slowly with an arrow nocked, that white clump materialized into my dead buck.

The shot turned out to be not quite as bad as what I had thought. It was just a few inches too far back and a bit low. The arrow had missed the lungs, but it hit the liver and slit the top of the stomach. The buck had traveled over a mile from where I shot him.

As I ran my hands over my biggest (and first) mule deer buck’s rack, I concluded that maybe we shouldn’t measure good or bad shots in inches, but rather in yards run and hours endured.