Here’s a head-scratcher: It turns out one of the best predictors of trophy mule deer is elk habitat. That’s the... 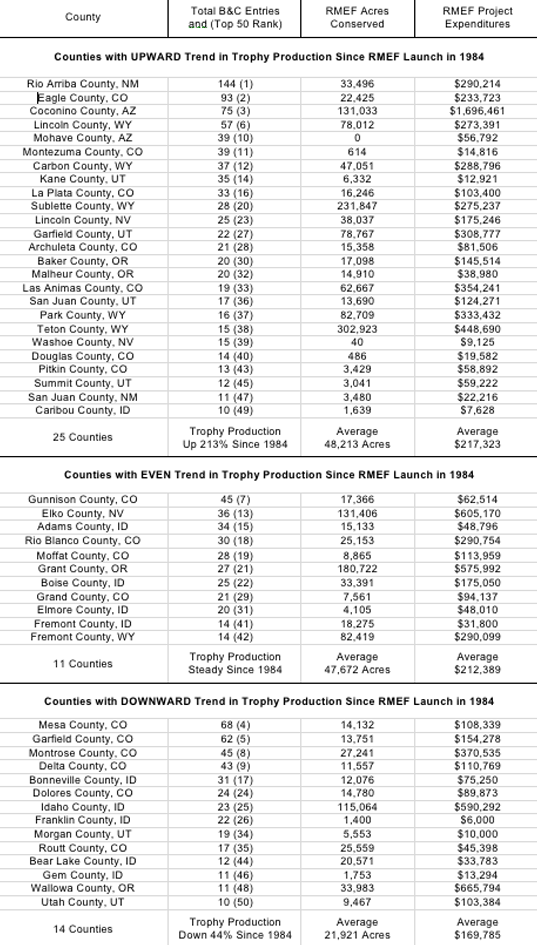 Here’s a head-scratcher: It turns out one of the best predictors of trophy mule deer is elk habitat.

That’s the surprising result of research into two seemingly separate trends, the counties that have produced the top mule deer over the past 28 years, and wildlife habitat that has been improved by grants from the Rocky Mountain Elk Foundation. It turns out that the counties showing the greatest growth in record-book buck production are the very ones that have received the most RMEF habitat-improving funds.

Research by Outdoor Life and the RMEF shows an upward trend in book-buck production in the top 50 counties for record mule deer. In other words, the best of our mule deer country just keeps getting better. That’s likely a function of abundant escape cover, conservative hunting regulations, and mild weather.

But it’s also a function of productive habitat, habitat that’s been improved by more than $10 million in Elk Foundation funding.

“The data show a striking correlation,” said David Allen, RMEF president and CEO. “Of the top 50 mule deer counties in Boone and Crockett records, 36 are seeing an upward or even trend in trophy buck production. In each of these counties, we’ve conserved an average of about 48,000 acres. In the 14 remaining counties that aren’t faring as well, our average project acreage is currently less than half that amount.”

Allen notes that it’s not just the RMEF’s work that’s benefitted mule deer, but work of state and federal agency partners and the help of private landowners.

“Together, we’re contributing to increasing quality in some of the West’s most prominent mule deer herds,” added Allen.

ABOUT OUR RESEARCH
Trophy trends were identified using Boone and Crockett records for typical and non-typical mule deer. The combined top 50 counties were included in the research. Upward, even and downward trends were based on the number of record-book entries before and after 1984, when RMEF began its work to ensure the future of elk and other wildlife.

“But habitat quality is a major consideration,” he said. “Our mission statement directs us to ensure a future for elk, other wildlife, their habitat and our hunting heritage. After elk, mule deer are perhaps the species most affected by our work, and it’s gratifying to see quality mule deer herds alongside healthy elk herds.”

RMEF so far has invested more than $10 million on conservation projects in and around the top 50 trophy mule deer counties. Funding from RMEF helped leverage additional support from partnering agencies and organizations, resulting in an overall conservation effort valued at more than $236 million.