Mule Deer Hunting Dispatch: Love and Damnation for Fuss-Budget Does

In my last dispatch from mule deer country, I told you it was time to get aggressive, to storm the... 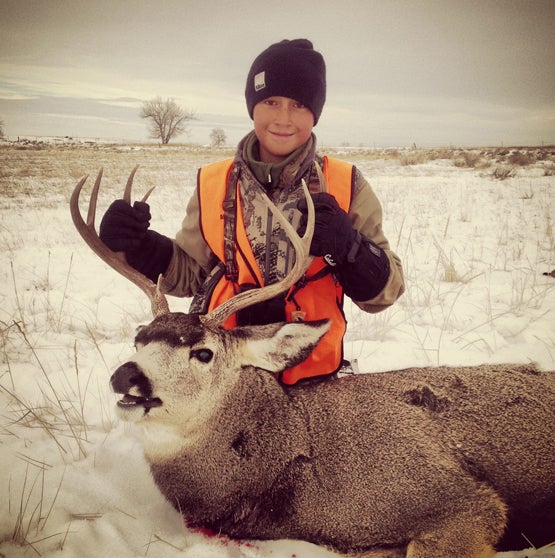 In my last dispatch from mule deer country, I told you it was time to get aggressive, to storm the castle and push rut-minded bucks.

That’s exactly what I did on Saturday. I knew at least three great bucks were feeding and pushing does in an alfalfa field, so instead of hanging well away from its margins, waiting for them to traipse out and bed down, as I had been doing all last week, I decided to hunt the very edge of the alfalfa.

I was working in to position well before shooting light with my buddy Mark, and we were nearly to the spot where we could see deer in the field and have an easy shot as they left the field.

Then we were pinned down by at least 20 does and their fawns and a few young bucks. I had to sit on a sidehill for two hours, my butt melting into the snow, as these deer took their time feeding and loitering on the edge of the field. Finally, one wary old doe took notice of our motionless forms on the hill, and she wasn’t satisfied with simply wondering what we were.

She had to check us out, up close and personal. While she was working to within spitting distance, one of the good bucks–a boxy 27-incher–pushed a doe out of the field and came within 200 yards of our spot. But we couldn’t shoot, or even glass him, because that old doe was breathing down my neck.

Finally, the sentinel doe figured out we were no good, and blew an alarm snort that cleared the field. When her herd was safely out of range, the doe beat her own stiff-legged retreat.

I hate does like that, the smartest, most suspicious matrons on earth. And also the reason more mature bucks live the hunting season longer than any other. Oh, I despise them. And, oh, I respect them.

Footnote
After our blown opportunity on Saturday, we returned to the field edge Sunday with my boy, Ellis, who shot a doe early in the season but was holding out for a mule deer buck. It’s his first hunting season, but he’s already a steady hand, able to hike miles without complaint and able to shoot consistently and effectively.

We hunkered down in the same corner of the field were the wary doe gave us away the previous day, and maybe that’s why we didn’t see many deer in range. Ellis got cold, impatient, but just as we were about to leave for hot cocoa and the warm pickup cab, a mature buck started pushing does out of the field our way. It took more than a half hour, but finally the buck moved in front of us, though he was still 300 yards away. I wanted him within 100 yards for Ellis, but it appeared that he would follow a hot doe on a trail that might take him within 200 yards of our position.

I got Ellis behind his rifle, ranged the spot we figured he would stop. The last range I got on this deer was 234 yards, and Ellis whispered, “I can make this shot, Dad.” “Okay, then,” I said, “wait until he’s broadside and…” I never got to finish the sentence. Ellis had his first buck.