Mule Deer Hunting Dispatch: When the Weather Breaks, Get Out and Hunt

My East Coast colleagues impacted by Super Storm Sandy earlier this month were knocked back by power outages, downed trees,... 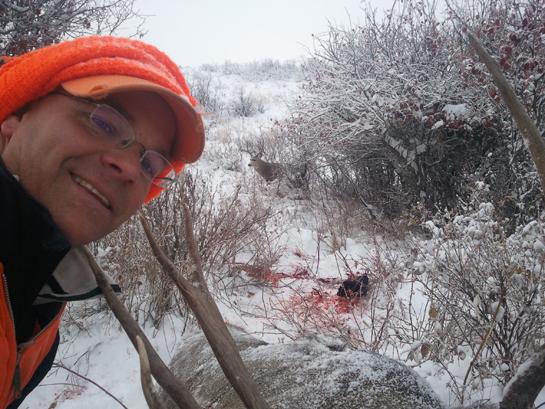 But the whitetail hunters amongst them were antsy for another reason: they wanted to be in the woods the moment the storm broke. They knew deer would be moving with the suddenly clear weather and bucks would be roaming in pre-rut seeking phase.

Mule deer hunters should take advantage of the same phenomenon. Get out the minute the weather breaks and you’re likely to see does out feeding and bucks circulating among the does.

The winter storm that slobberknocked much of the West and Northern Plains over the weekend sent most mule deer into lock-down mode. But the sun’s due to come out today. You should be out, too.

While you’re gathering your gear, check out this photo from my fellow Montanan, Jacques Rutten of Lewistown. He took advantage of the break in the weather to take a dandy mule deer buck. When he was photographing himself with the deer, he didn’t know he had company. As he reviewed his photos on his phone, he discovered this other buck, coming in on stealth mode behind him.

As Jacques says, “it was pretty wild and a good reminder of how normally intelligent mule deer bucks lose all common sense when November rolls around and the rut kicks into high gear.”