We were down to the second-to-last day of the season and I was getting nervous, though not because time was... 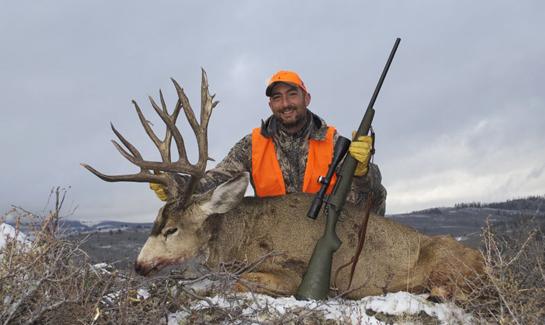 We were down to the second-to-last day of the season and I was getting nervous, though not because time was short. A huge mule deer that had been seen previously was in the area and we were going to make a play on him.

Two other hunters had tried, and failed, to take him that season, mostly because he lived in such a challenging spot.

The timber where this giant was located was near the edge of the property, so a careless stalk or any other type of excess pressure could kick him off the land where we could hunt. That was his bedding area, though at first and last light he would sometimes come out in the open with his large harem of does to feed–mostly on a high, exposed knoll of sage.

This boss-deer had chosen his location wisely. That knoll had a commanding view of the country for thousands of yards and it was hard to get close to it without risking your scent getting captured by the prevailing wind currents and spooking the deer.

With a deer of this caliber, my friend and guide, Cody Arnold, and I didn’t want to leave anything to chance.

We spent that morning prepping for the hunt. I double-checked my rifle’s cold-bore zero and my drift and drop tables. We made sure we had two laser rangefinders on hand with fresh batteries. We reviewed topo maps of the terrain and kept an eye on the wind and weather.

We decided to get into position early. We hiked up an adjacent hill that overlooked a draw where we thought the deer might show. Near the top, we settled into a natural hide of juniper and sage. I went prone, using my pack for a rest while Cody, just above me, was kneeling in a deeper patch of brush.

I took time to range all the landmarks from my position. The bottom of the draw was 119 yards out, presenting a relatively easy shot should the deer show there. The timber edge where the deer had been bedding was about 270 yards away, and the crest of the large hill across the draw was at 320 yards.

Sunset wasn’t for another three and a half hours and after an hour or so of lying flat, the ground sucked the heat out of me and I started to shiver, first just lightly but after a bit with full-body tremors triggered by the marrow-chilling cold.

Two deer came out into the open, one small doe and a young buck. They were on the side of the hill and even the slightest motion to glass caught the attention of the doe, and then the buck.

Their skittish behavior put us on edge and I pressed myself tighter against the ground, resolving not to move.

With about 10 minutes of shooting light left, some does started to appear at the top of the hill across from us. First there were six, then eight, then more than a dozen.

Cody said to me in a hiss, “get ready,” though there was no need for that.

I had already adjusted my pack to get into a better position.

The buck came out at last, closely trailing a doe that was trotting back and forth across the hill.

I took a few deep breaths to settle my shaking and waited for the buck to stop broadside. The moment he did, I shot. The bullet hit with an audible thwack and the buck jumped up and moved behind a rise in the hill with just his head and neck visible. I was getting ready to send another bullet at him when he flopped over and kicked up a large clod of dirt.

Cody and I looked at each other with wide-eyed disbelief. We got him.

The buck is a rare and regal beast that will easily make the Boone & Crockett all-time list. And he was more special because of the radio collar he had on his neck.

It turns out the buck is part of a study by the Colorado Parks and Wildlife on big buck mortality.

We met up with a local game warden back at the skinning shed at the C Lazy U, who took the collar from the deer, collected a tooth to age the buck and some other details about the hunt from me.

In the coming weeks I’ll be hearing from the biologist who is heading up the study to learn more about my buck and the others who have been in this study for the last couple years.

But that part of the buck’s tale will have to wait. For now, I’m still reveling in the hunt and counting my lucky stars that I was fortunate to cross paths with such a magnificent animal.