The Viscerator: A New and Effective Gutting Tool

If you have never punctured a deer’s stomach or perforated its intestines while field dressing it, then you haven’t handled... 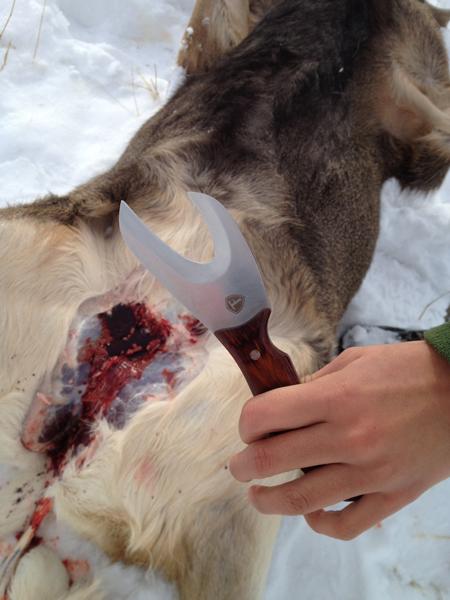 If you have never punctured a deer’s stomach or perforated its intestines while field dressing it, then you haven’t handled that many deer.

It happens. And it’s never good when it does. Stomach contents spill onto meat, or fecal matter leaks inside the abdominal cavity. It’s messy. It’s stinky. It’s bad.

There are all sorts of tools designed to minimize gut-puncture, and I’ve used most of them. Once. Standard gut hooks get clogged with hair or fat and are useless after a few incisions. Many gutting knives feature sharp points that easily puncture internal organs. And the best, surgically sharp knives useful for gutting aren’t stout enough to split ribs or the pelvic bone.

That’s why I wasn’t especially impressed when a new tool for gutting crossed my desk. Its grim name, the “Viscerator,” didn’t help its cause, and neither did its appearance, looking more like a goblin’s weapon than a deer-gutting tool.

It remained in its box for over a month. But halfway through our deer season, I took a closer look at the blade, and the handwritten note from its inventor, Chris Stuckel of Neenah, Wisconsin, who explained that he had designed the knife after hearing how a deer hunter had severed his femoral artery while eviscerating a deer.

The Viscerator, marketed by Stuckel’s FieldTorq Knives, is basically an oversized gut hook, with a sharp blade on the interior edge and beefy “jaws” around it.

After the first deer I gutted with the tool, I saw its value. The hollow-ground edge is open and keen enough that it doesn’t get clogged with viscera. And you don’t have to worry about the sharp point perforating the guts.

But while the blade handled the flimsy abdominal tissue just fine, I was stumped about how to split the deer’s ribs with the blade, since it isn’t sharpened on its outside edge. So I called Stuckel, and he explained that I was using the Viscerator all wrong.

Instead of trying to slice the ribs, the blade is designed to punch through them. You use a motion like opening a tomato can, positioning the longer blade on top and lifting the handle up. By pushing the blade and pumping the handle, the ribs open like a zipper, without the sharp, hand-cutting edges that are one hazard of a traditional knife.

After talking to Stuckel, I used the Viscerator on my boy’s mule deer buck, and it worked just as he described, without any perforations in the innards or hardships cutting the ribs and pelvis. Since then I’ve gutted three more deer without sharpening the chromium-steel blade.

Right now Stuckel’s blade, which retails for $60, is available only at Scheel’s stores in Minnesota, or on his website.

It’s a good tool, and now it has a permanent place in my hunting pack.