Inside The Roost Zone

The timeworn drill goes: “Set up 100-200 yards from a roosted gobbler, then work that bird.” Sure, sometimes it’s better... 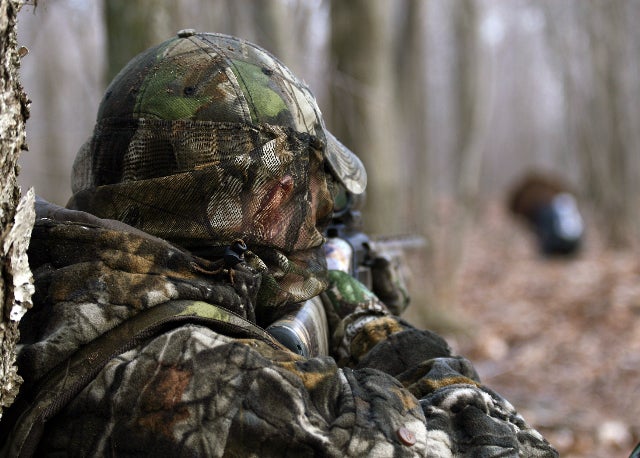 The timeworn drill goes: “Set up 100-200 yards from a roosted gobbler, then work that bird.”

Sure, sometimes it’s better to pick a setup well out of a roosted gobbler’s sight, but still within hearing distance. Other times you need to get tight — real tight. Take one spring hunt for example . . .

I scouted a New Hampshire spring gobbler before the season on an un-posted farm that routinely saw some in-season hunter traffic. Not only would killing the bird prove challenging, but I’d have to consider Opening Day influences. So, I did a number of obsessive-compulsive things all of us die-hards favor . . .

I roosted the turkey on a regular basis in the weeks before the opener. Sometimes he favored one side of the river; sometimes mine on the farm. The late afternoon before the opener I fortunately located the tom on my side, so I sat down in the woods, and waited for him to fly up. At one point, another scouting hunter walked right past me, obviously late for something by the way he was moving. That worried me a little, but I’d just have to play my hand.

The next morning I parked my truck well before dawn, and walked the half-mile to the bird. I found the tree I’d picked the day before, and slinked down, mouth diaphragm tucked in my cheek.

The bird first gobbled on the roost — on a limb but well under 100 yards. I stayed quiet though far off some guy romanced his barred-owl hooter.

Big wings ticked branches on the way to the ground. Once there, the turkey gobbled some more. That’s when I first called. He ripped back on the edge of range — unseen through ground cover.

Ready, my shotgun had affixed itself to my bent left knee well before that, and I held the assumed shooting position, mentally willing the bird into range.

Problem is, the turkey hung up. At that, I called, eager to close the deal. He’d have no part of it. Were other hunters listening to my calling? Were they moving in on the vocal gobbler? Such are the thoughts of a turkey-obsessed hunter.

So I shut up. So did the bird, fortunately. I waited a long, long time, feeling the gobbler was in no hurry. Clearly another approach was needed to unhinge the bird. My response? I spit the mouth diaphragm out.

Say what? Yawp-yawp-yawp, I softly called with my natural voice. GRROBBLE came the response after the many long minutes of shared silence. The tom was right there, right now, well inside range. He’d waited all that time.

The gobbler leaned forward then, almost imperceptibly the way they do. That was the last thing that longbeard saw. Getting tight and knowing that turkey well had worked this time. The trick? There are actually five:

Have you Strut Zoners had much luck with setting up close to morning roosts? Do you try to avoid crowding a gobbler using this tactic? Will you try to do that more during your upcoming spring hunts?