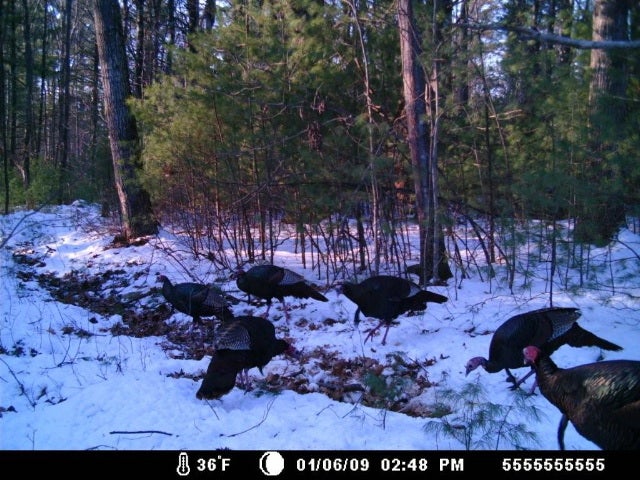 Strut Zone regular James Patch sent us these trail-cam images of a northern New England longbeard flock and holdover buck. The pics were taken in the same January location, but where both seasons are long over, with spring turkey opportunities coming to this part of the country in early May.

Patch writes: “Pulled my cameras Friday knowing we’d be getting snow. Will put them back out tomorrow although it will be tough trekking due to the extra foot of snow. I will definitely get some bindings for my snowshoes! Looks like another late spring!”

Off-season scouting, whether on foot or with trail cameras, keeps us all in the game, engaged and looking forward. Patch’s pictures indicate these Snow Belt turkeys (and at least one whitetail) are finding a way to make a living, even though freezing temperatures and snow events dog them. Some ideas to keep in mind as you scout for turkeys:

Flocks will break up as the days warm and daylight lengthens.

While large wintering flocks tend to disperse, often some of these turkeys linger in available habitats. I once scouted a broodless group of winter Maine jakes and young hens a few years ago. By spring, the young gobblers had left the group, and a full-fan longbeard had arrived to hang with the hens.

Any of you Strut Zoners checking cameras now? How are the flocks doing in your part of the country?