You Strut Zoners in the Midwest saw it this past week during the warm spell. When an Iowa turkey bud... 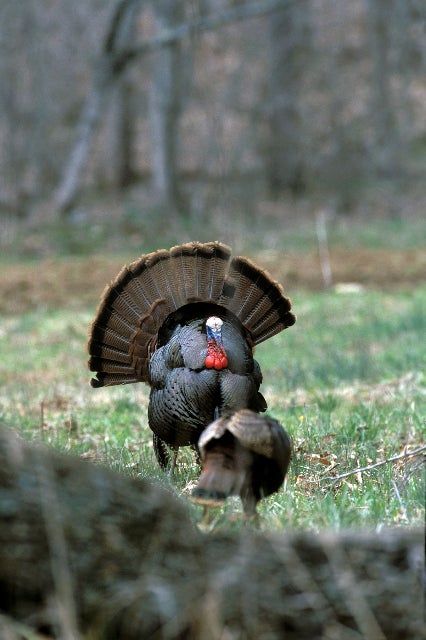 You Strut Zoners in the Midwest saw it this past week during the warm spell.

When an Iowa turkey bud calls and leaves the message, “Huge flocks are coming out of the woods, and some of the gobblers are strutting,” you listen. And he’s not alone: other reports indicate the same thing: early gobbling and full-fan turkeys.

Biology tells us that while male turkeys may strut early in the year during warm spells with snow on the ground, hens rely on other factors to flick the breeding switch. This early gobbling and strutting activity means less to the hens than we’d like to think. Hens mate based on increasing daylight, and won’t breed or lay eggs until real spring has arrived. That’s a fact. Though spring weather events sometimes disrupt nesting too . . .

Of course this phase varies nationwide, from Florida, where the season begins next month, to Maine, where it lasts until June 6 this year, and all points west.

The winter turkeys I saw this morning in southern Maine weren’t strutting (though it’s a balmy 44 degrees as I write this). They were flocked up under a stand of tall white pines, shaking off the raindrops, scratching out a living in the dirty snow beneath those trees. Survival insists on it. So does my mental health, and I was happy to see them. I think a lot of you will agree, that kind of sighting never gets old, especially in February.

This morning, that same gobbler-crazed buddy called again. “I looked at the same fields today, after winter returned and it got cold again, and there’s no activity. None.” Just like that, the early tease posed by strutters in fields passed. Those Iowa birds he and others saw are somewhere though. You can count on it.

What are turkeys doing in your part of the country? Gobbling? Strutting? Just trying to hang on like the rest of us until winter finally passes? Let us know here at the Strut Zone.