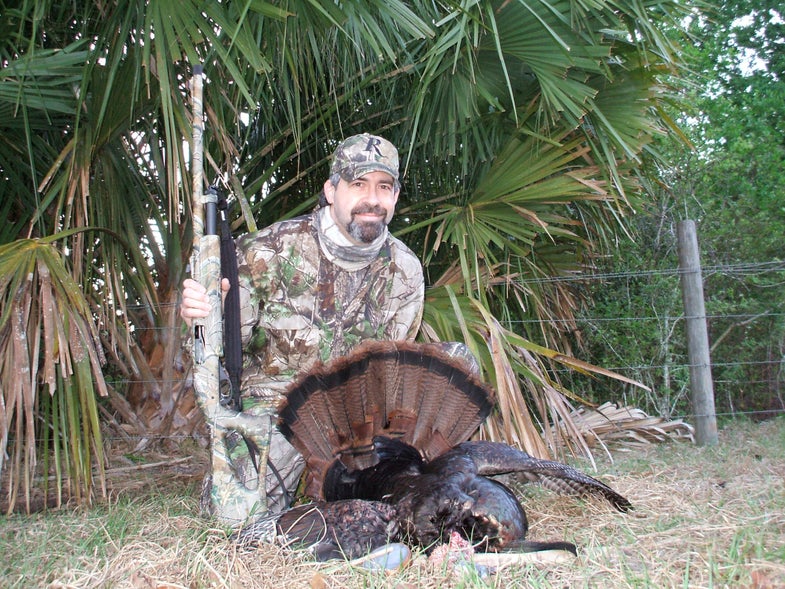 I didn’t want to get too close at first, nor listen too far from where they might be. I owled with my voice to locate the group, and brought in two real barred owl specimens, silhouetted against the crescent moonlight, birds that landed in the oak above me, joining in the chorus. Nothing.

Not long after though I heard the soft yet raspy tree yelping of a hen. Still mostly dark, I slinked down the fenceline toward the bird, found a good place to set up where three palm branches hung over the field edge. I was well inside 100 yards of the roost.

Comfortably sitting now inside the drooping palm fronds, I softly called with a mouth diaphragm and slate at the same time. That initial hen answered with a raspy return I now recognized, and many others chimed in. Where were the gobblers? You Strut Zoners might be thinking the same thing. I waited, listened. A crow passed by, cawed. A gobbler hammered back, no more than 50 yards off my left shoulder, if that. I softly called some more, and three gobbles echoed my way.

As fly-down time arrived, a burst of wings approached, and landed to my left: a half-dozen hens in a cluster of soft clucking and yelping. One even kee-keed. They stood there, looking. Round 2, a big hen sailed off the roost past us and into the center of the field. Was she onto to my deal? Maybe. Hope she doesn’t screw this up, I thought. I still didn’t call with turkeys just to my left at maybe 20 yards max.

I wouldn’t wait long. A rush of wings to my left, a dark form sharply banking toward me, and a gobbler landing 15 steps off my position. The gobbler stopped, head juking as I sized it up, then swiftly moved toward the field hen. At that, I softly clucked and yelped to bring the turkey back. The longbeard wheeled and returned to his fly-down position in front of me. Looked my way. That’s when the Florida tom heard me cluck a final time to get its head up.

I savored the sweet seconds, and pulled the trigger.

A quick shout out to BRBB with congratulations on his fine opening weekend monster tom. I’ve other reports too on other gobblers taken by other guys on some pretty cool hunts, from bow birds at close range to Plan B tactic gobblers, so stay tuned. It’s “game on” time SZers!