Anti At The Wheel

I handed her my long black gun case. She put it behind her driver’s seat, saying, “Sure hope that thing... 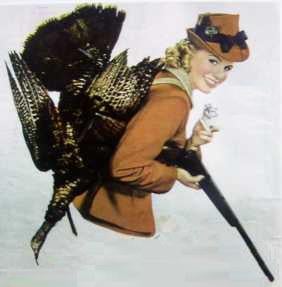 I handed her my long black gun case. She put it behind her driver’s seat, saying, “Sure hope that thing doesn’t fall on me! What’s in it?”

“A hunting shotgun,” I answered, just as she, the airport shuttle bus driver, apparently saw my “Got turkey?” sticker slapped to it. I was returning to New England from my recent Texas hunt.

“Well you better not come and hunt MY turkeys in MY backyard! They’re like children to me,” she said.

This conversation was off to a strange start. I took the offensive.

“Do you know how those turkeys got there?” I countered, smiling.

“Well, no I don’t. I just moved here from California a few years ago. They’ve always been in my backyard as far as I know.”

I launched into a short history of trap-and-transfer wild turkey management, and how hunter dollars paid for much of the restoration, and that in a way she had us to thank for that.

“Well, do you eat those turkeys?” she asked, curious. After hearing my positive response, she said, still driving slowly, “Is there one in THERE?” meaning my overweight checked bag on the floor in front of me. I said there was. She cringed. Furthermore, I said, we were likely having it for dinner soon, as I love to cook wild game.

She thought hard about all this, going silent.

“Well you seem like a nice person,” she said, “I just don’t know how you could shoot these beautiful creatures.”

I told her how many of us are fascinated with the wild game we hunt. We study them to hunt them better. They amaze us. And yes, we shoot them, ideally utilizing fair chase standards set forth by the tradition. I’m a proud hunter, and apologize to no one for loving it. Like you guys do, no doubt.

By the end of it, I’m not sure what had been accomplished. She’d met a real live wild turkey hunter, and I’d survived an encounter with an anti-hunter at the wheel of an airport transportation bus.

“Well it’s been nice harassing you,” she cheerily offered as I unloaded my gun case, big travel bag, laptop carry, and backpack onto the asphalt of the long-term parking area.

“You take care of our turkeys now,” I responded.

What would you guys have said or done?