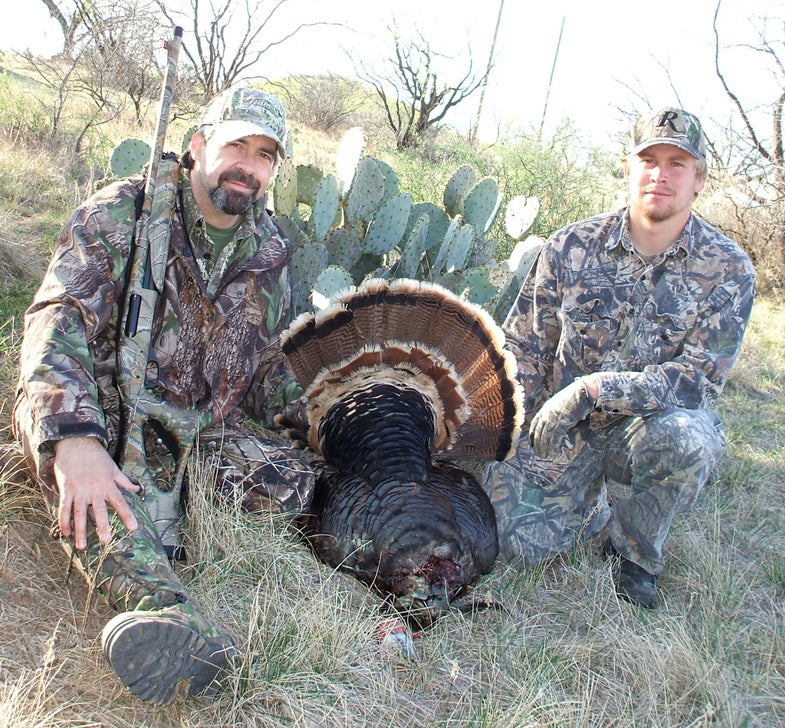 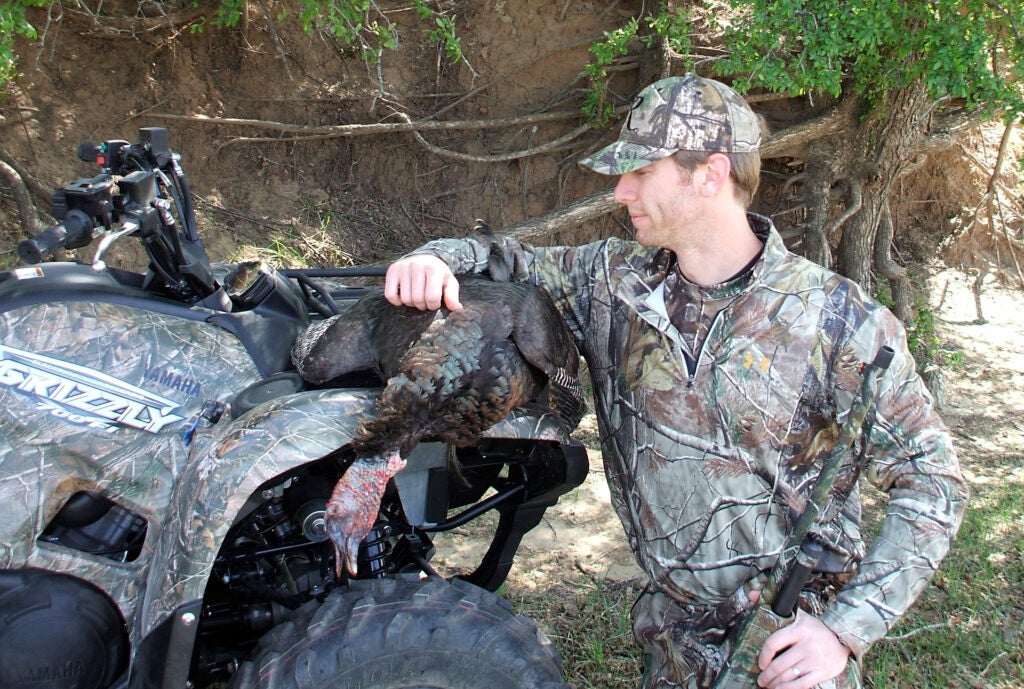 PUTNAM, TEXAS–Before our Lone Star State hunt this past week, Goldsmith Ranch owner fifty-something Steve Goldsmith, our instantly likable host with the energy of a guy half his age, filled me on his Rio Grande turkeys. “Birds are all henned up. They could be tough.”

I listened as we enjoyed a massive steak at the nearby Beehive Saloon (Albany), a baked potato (“loaded,” as in split wide and stuffed with sour cream, cheddar cheese, and bacon bits), and a soft drink as big as a lunch bucket. I love Texas for many reasons, and tend to spring turkey hunt it annually. The next day, I pulled the trigger on a Rio Grande gobbler right after fly-down on the opener. (Check out my previous SZ post.) We’d gotten on the board.

On Day Two of the hunt and our third in camp, we located some gobblers on the roost, birds that kept running with the hens as predicted by Mr. Goldsmith. After some major repositioning and maybe a half-mile hike, we had a tom come to 80 yards or so, with my buddy Van Holmes set up as the gunner. No go.

Legal in Texas but not Maine where I make my home base, that afternoon we hunted a gorgeous spot guide Jeremy Baxter knew well. We called in a hen, got close to other turkeys. At our guide’s solid suggestion, we set up in a gorgeous hillside bottom, that later saw a coyote drift into range of our yelping.

The afternoon wound down. We called some more. Then suddenly, as the brisk wind that had plagued us all day dropped, and the air cooled a little, a gobbler answered up the little rise. We called. He gobbled closer, hunting us down. Stepping out of cover, that bird looked eight feet tall. He strode down to the little flat, looked once at the hen decoy, and drifted toward the roost.

“Shoot, shoot, shoot, shoot, shoot,” I hiss-whispered as the brief opportunity was about to pass. Holmes made good. The shot was all of 35 yards if not a solid 40 (Remington’s Wingmaster HD), and through a small opening in brushy cover about the size of that big steak I’d enjoyed the day we arrived. The bird dropped, flopped. I got up and sprinted toward it.

Holmes, who had some experience bird and big-game hunting, had sealed the deal on his first wild turkey. His smile lighted up the waning afternoon. Fist bumps all around as we relived what had just happened . . .

Texas turkey camp was going out with a bang. By the end of it, five guys had tagged a total of three birds. Tough sledding, but we’ll take it. We also hunted wild hogs with dogs. Coyotes. Drove our Yamaha Grizzly wheels around the rugged country (www.yamahaoutdoors.com). Averaged four hours of sleep each night . . .

I can’t wait to get back next year.