The setup looked perfect. Turned out it was. Gobblers sounded off to the front of us, answering our tree calling,... 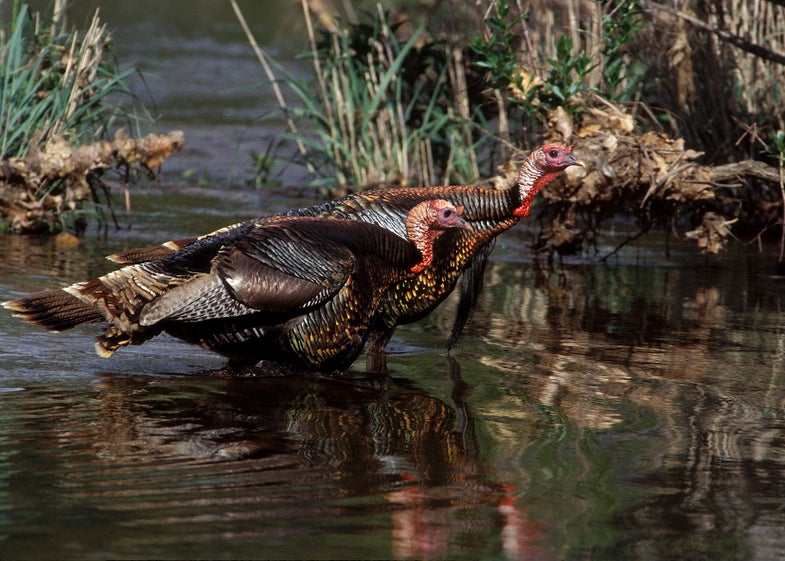 The setup looked perfect. Turned out it was.

Gobblers sounded off to the front of us, answering our tree calling, around a 100+ yards off our position, roosted near an open field, and above a creek. Would they cross the water to our side? Would they fly down to the other side? Real hens softly called, adding to our anticipation. Sunrise arrived, warming the comfortable spring chill in the air, and adding to that game-on energy only an opening day in spring turkey country can offer.

Soon, the big birds flew down, black blobs that drifted toward us. We clucked, yelped. I ran a mouth call and slate, making like a bunch of turkeys. Jeremy Baxter, who’d scouted these Rios and had a solid sense of what they might do once they winged to the ground, worked a slate behind me. My buddy, Van Holmes, sat locked in to my right, facing the field, and a gate opening we hoped the turkeys might move through to our position.

Wishful thinking is a good part of turkey hunting, all hunting really, and we were no different. Soon a wad of black birds ran away from the main group (many hens, a jake and longbearded strutter), and stopped, under 100 yards out, but at a different angle now. Two full-fan strutters. A handful of others milling around (jakes). Fighting purrs. Some gobbling on the ground. Wings flapping. Attempts at spurring each other. They were sorting out the pecking order, a daily deal for male turkeys, especially this time of the year. Would they drift past us and away in the other direction? It seemed like that might happen. We needed to stop that bad thought with some amped-up calling.

That’s when the seven turkeys looked our way, then RAN.

Toward us. Wing to wing, jostling, going into semi-strut, they couldn’t get to our position fast enough. Maybe too fast. The line of turkeys streaked toward Holmes who was locked in and waiting. Now I was trying to slow them down, spread them out for a solid shot, even stop them. I was first thinking double, then of just getting my buddy Van a bird since he faced that footrace in the making.

The line of gobblers shifted into third gear. Call or shut up?

The gang was about to run us down. Too tight for a clear shot at a single bird, Van held off. They ran past him, slowed slightly, looking around. I watched it all on my side of the tree, my eyes flowing with the action. The first bird passed by, a good gobbler, with the biggest beard of the bunch. He sprinted past way too fast for a close-range shot. The next five birds were all jakes. The last bird, a longbeard too, stepped by, and in front of my shotgun. The other six were well past now.

Now or never time had arrived.

Safety off, I clucked, HARD. Up periscope went his red, white and blue head. The last gobbler stopped, turned my way. I saluted him with a 3-inch load of Wingmaster HD 6s. Distance: four yards. No typo! At that, some of the birds flushed. Three lingered not far away, including the other longbeard, but the angle was tough for my pal Holmes to capitalize on for a buddy double. The turkeys drifted off.

We were on the board in Texas. The bird, a gobbler now fully grown from that super hatch two years ago, had started things off right for us.

As I write this, it’s early afternoon of Day Two following a windy morning of running-and-gunning, crossing creekbeds, snaking around on game trails, trying to get into position on mobile henned-up turkeys following the arrival of a cold front last night. We managed to call a vocal gobbler to 80 yards or so in the woods, a hung-up bird that wanted to see what was making the turkey talk from our position. It didn’t, drifted off. Plenty of hunting to go this afternoon, and tomorrow. Stay tuned for a full report on the rest of my Texas hunt Strut Zoners. Keep us posted on how you’re doing around turkey country too . . .