“Who’d a thought you could even find a turkey during a dust storm with 40+ m.p.h winds?” Skipper Duncan said... 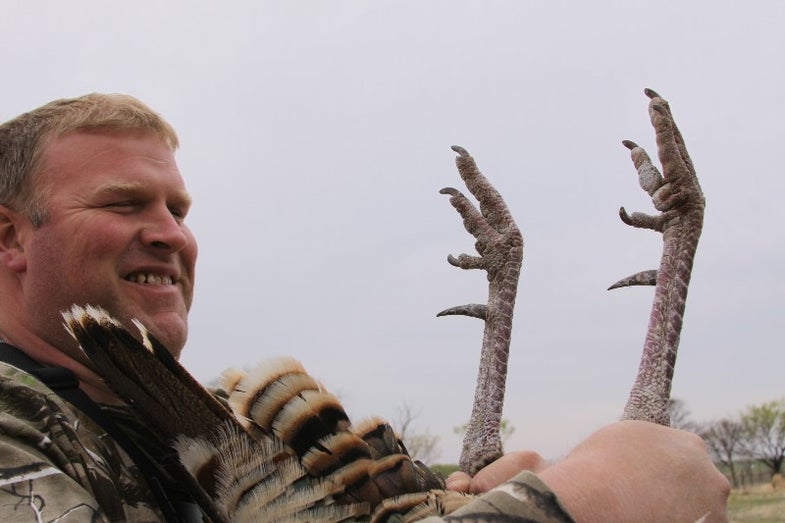 “Who’d a thought you could even find a turkey during a dust storm with 40+ m.p.h winds?” Skipper Duncan said in his recent end-of-season report. “Here’s proof that even unfavorable weather can still produce results.”

It’s been a handful of years since I sat around the fire ring at Skipper’s place, but the following spur stats from a couple trophy turkeys don’t surprise me.

The spurs on this Texas longbeard shot by Tommy Odom of Georgetown, MS took top camp honors (pictured here). Duncan says both daggers were carefully taped to 1 and ¾ inches. Nice. Another one of the guys visiting Duncan’s Adobe Lodge (http://www.adobelodge.com/> ) nailed a gobbler with 1 and ½ inch stickers. Derek Amos of Reva, VA took that Rio Grande turkey.

Mr. Duncan also confirmed what many were thinking going into the Texas spring campaign: the jakes that swarmed us in 2008 were grown up two-year-olds this season. In the case of these two sharp-spurred turkeys, much older gobblers are out there too. All told, 41 hunters in his camp took 74 gobblers. Factor in 11 missed shots, and 105-degree weather at the wire as final tally challenges.

Any of you Strut Zoners kill turkeys in extreme weather conditions this season (or others) such as the dust storm or serious heat mentioned here? What about spurs that rivaled these?