An Anti Bites The Dust

Like you Strut Zoners, I’m getting my fall turkey permits, multiple-state licenses and other details all lined up. Once bow... 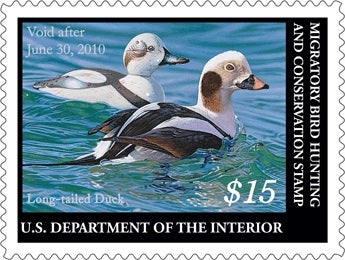 Like you Strut Zoners, I’m getting my fall turkey permits, multiple-state licenses and other details all lined up. Once bow turkey, resident honker and other opportunities begin in September, it’s fast and furious on this end until the winter show season. Four plus months of sweet madness.

It all started today in the northern New England summer heat; at least in my mind. I dropped $15 for a Migratory Bird Hunting and Conservation Stamp, a long-tailed duck drake bobbing on the open ocean next to a bobbing deke.

“That’s the second one we’ve sold today,” the postal clerk exclaimed, laboring to the back room to fetch one. “You hunt?” she asked on her return, oblivious to my camo cap.

“He hunts,” my 11-year-old daughter answered in the affirmative. “Turkeys. Geese. Ducks. My daddy’s crazy about it.”

“I’m not big on hunters,” the clerk continued. Ok, here it comes, I thought.

She launched into an anti-hunting monologue about us, and, according to her limited experience, the bad example we set. Then she quizzed me, thinking she had the upper hand: “Know what kind of duck this is?”

I did. Told her they were formerly called “oldsquaws” and that they still are by some veteran New England waterfowlers I know. Educated her to the fact only the males have long tails; that the hen’s posterior end is a stubby little fan. The two mounted on the wall above our log home’s woodstove (a drake and hen) are great examples, taken offshore on the Atlantic Ocean years ago.

“Guess your daddy knows a lot,” she offered. “What a learning experience.”

I didn’t stop there though, on the offensive now. I told her about holiday dinners with ducks and geese and dipping sauces. Wild turkey on Thanksgiving Day. About wildlife management. About what the duck stamp money did and what it symbolized. About my love for the tradition. You might have done the same thing.

“Thanks for the learning experience,” she offered: half grinning; half-sarcastic.

“No really, thanks. That’s interesting. I never knew that,” the postal clerk ended.

“Bye,” my daughter, ever the good-will ambassador, said, waving. I shot that clerk another smile and closed the deal.

Waterfowl season started today as I affixed that purchase to my license and signed the face. The real deal will arrive with the resident honker season in September, and I’m ready. I’d like to think a momentary cease-fire was struck with at least one anti-hunter: the woman who sold me my 2009 Federal duck stamp.

How ironic is that?