You don’t need to see that visual red swath of heat on Weather Channel maps to tell you it’s hot... 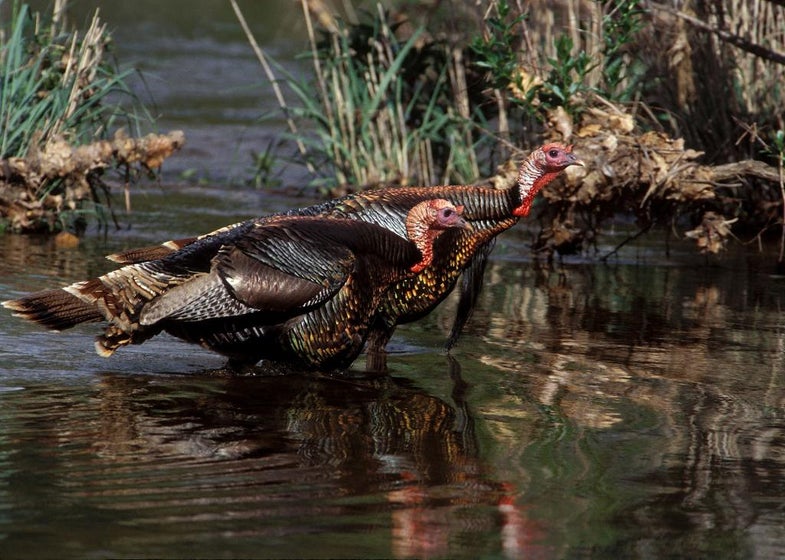 You don’t need to see that visual red swath of heat on Weather Channel maps to tell you it’s hot in some regions of turkey country right now. These birds are challenged by many things in summer: brood hens raising poults, and in the case of both sexes, finding drinking water.

According to Texas Parks & Wildlife (TP&W): “Turkeys, like all other terrestrial animals, require water for survival. Wild turkeys are able to get water from green plant material, fruits, insects, dew and free water from puddles, ponds, creeks and rivers. In the Post Oak Savannah and Blackland Prairie, water is generally not considered a limiting factor in habitat, except during extreme periods of drought.”

Like now. The TP&W also states that: “Wild turkeys prefer to roost in large, mature hardwood or coniferous trees with large horizontal limbs. Therefore, care should be taken to protect these trees from land clearing operations, especially along creeks, drainage areas, and wetlands.” Something to keep in mind as we work away at that to-do list on our properties between the spring and fall turkey seasons.

They even go so far as to suggest how we turkey hunters can help.

Construction of one small pond per square mile, or preferably one per quarter section (where there is no permanent water) will improve turkey habitat, says the MDC.

It’s all about balance. Habitat management for turkeys, as for any wildlife [such as deer], lies in developing the proper combinations of food, cover, and water which produce maximum numbers compatible with other land uses. In habitable range, the MDC stresses, food must be in proper association with cover and water. Seasonal abundance or scarcities of acceptable and preferred foods bring about changes in both habits and habitats of wild turkeys.

Want turkeys? Get yourself some water, and/or work hard to keep it.