Fall turkeys are easy. Yeah, right. For the Maine shotgun opener, we stayed local. It was my dog Luna’s first... 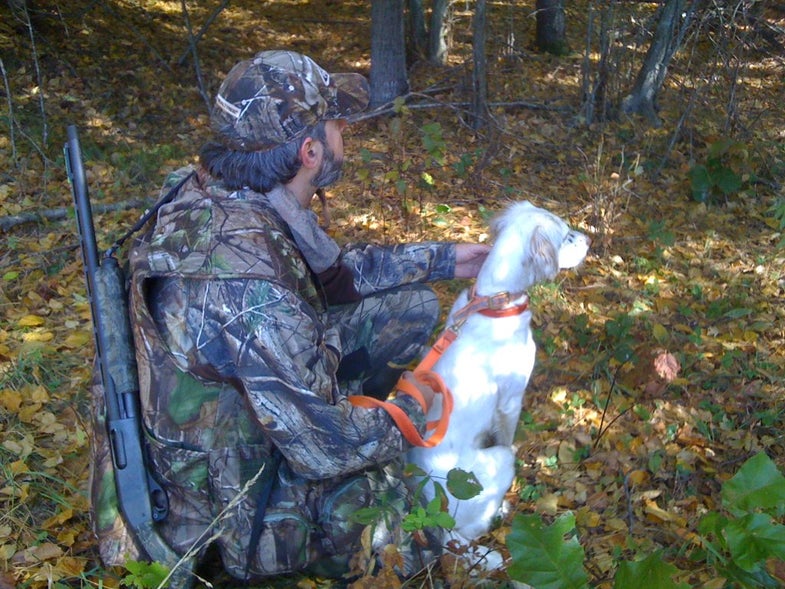 Fall turkeys are easy. Yeah, right. For the Maine shotgun opener, we stayed local. It was my dog Luna’s first in-season hunt.

Some 20 turkeys had flooded this rainy field days before the weekend start-up, shaking off like black Labs after a retrieve. Game time broke frosty though, near freezing; sunny, breezy and cold. Geese wheeled in the sky, but we were after different game. Turkeys? They’d vanished somewhere in acorn-strewn woods. At 8:30 my buddy Marc and I broke for breakfast coffee and to hatch Plan B.

Plan B: a bigger nearby farm. After a run to my house, we now had Luna along, my renegade English setter, age 1. She’d rather scatter birds than point them–good for this game. I’d found two flocks here: one with 4 turkeys; one with 9. The farmer offered his blessing, and we were off.

Turkey dogs must run big, but check back. Find turkeys then scatter them. Barking helps note the flush location. Once set up at the break site, you hide the dog, and attempt to call the birds back.

But first you have to find them. All bird dogs, especially pups, are a work in progress. As a handler, I lean toward quiet. I don’t like to give many verbal commands to avoid alerting game. This takes time; years. The silent approach is earned. With my setter Radar (7+) it’s all hand signals, stealth and the rare whistle. Like a sports parent from the sidelines, with Luna on her first hunt, I got way too chatty.

Turkey scratchings? Everywhere. Luna was gone for stretches of time, but no barking. Her tendency to yip-yap at yard squirrels and doves hinted at possibilities. “I noticed you kept looking at your watch,” my buddy Marc said. Yep. The last thing I wanted to do was lose her on her first fall turkey hunt. My verbal commands likely scared the turkeys deeper into the woods: “Luna come,” followed by whistling, way more than I usually do. Was I eager to speed the day to “finished” dog, and impress my longtime bud who’d hunted with my best turkey dog ever, my Midge, now gone? Maybe.

We hunted hard. By the end we were both carrying tags. Arriving home, my wife said: “You’ll never believe this!” One of her Facebook friends had just posted a short video of turkeys in his backyard 22 minutes before. Her FB friend, let’s call him B., didn’t hunt, but he had a fix on turkeys: out his window. “My” turkeys. He and his wife live on the other side of the woods we’d just hunted.

“Nine turkeys?” I asked, almost knowing the answer. I watch the vid with her. Sure enough, there they were on the popular social networking site. My 9 birds. My buddy Marc’s joking jab: “They were just about as far away as scared turkeys would run if a guy in the woods yelled at his dog all morning!”