New York turkey camp was pretty much history. Handshakes, photos, and good wishes all around; many of the guys were... 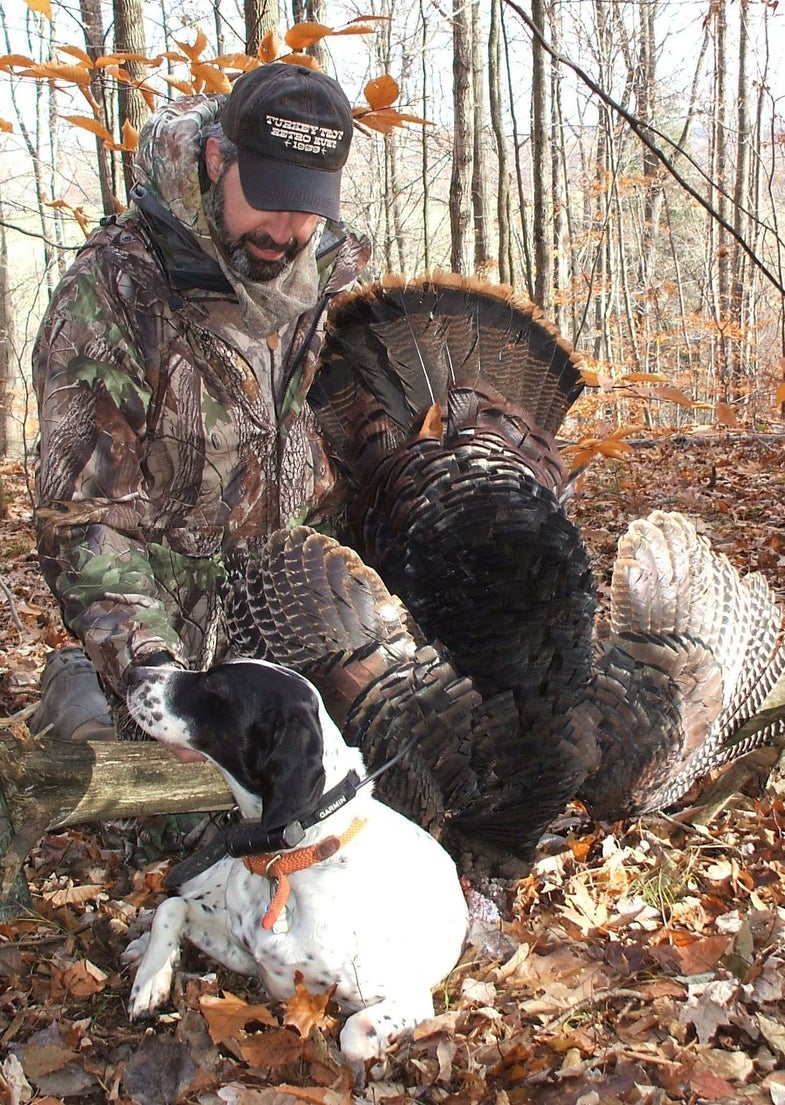 New York turkey camp was pretty much history. Handshakes, photos, and good wishes all around; many of the guys were heading off to hunt Ohio turkeys; problem is, we still had a little gas left in our tanks, Daryl and I did. And a couple New York tags to spare. A plan was hatched.

Pete had his big running male Byrne dog Clyde along. When we heard the gobbler yelping in the woods–cronk, cronk, cronk–it wasn’t long before our canine partner was on that assignment.

Barking followed, then flushing turkeys, more barking up the hill, and even beyond that. Now that the flock was separated, we’d set up at the break site to try and call them back to the guns. Mr. Clare installed Clyde in the blind. Scott Basehore did the same with his dog Jenny. Mr. Stubbs overlooked one side of the setup, and I did the other. We had it covered.

You fall gobbler hunters know a wait can be involved. They can come back gobbling and yelping after a break, even strutting. Sometimes it happens instantly; often enough not. This one took nearly two hours. Pete gobbled and Scott tagged jake yelping on the end of it. We heard one turkey fly down off near Clyde’s second round of barking; then another. We waited a bit more.

Then suddenly Basehore hissed: “Turkeys, to your left. Don’t move.” Two gobblers cruised down the incline, stalking the calls. Stubbs had the shot, a tough one. Bird down, but not out. The second poke did the job. The survivor sprinted down the far hillside.

After a fist bump or two, Daryl and Pete left while Scott and I hatched a plan. “I’m ready to wait here all day if you want,” Basehore, who had put a tag on a bird days before, offered. It was game on.

Another long sit, but I could live with it. The scene was something out of a Ned Smith painting–a gorgeous hardwood hillside in turkey heaven. My pleasure increased as Scott floated some well-timed gobbler yelps then laid on some silence. Then, from the direction the surviving gobbler ran, came yelping, coarse and steady. We both heard it. I readied myself in that direction. That was when another gobbler started yelping from above, the site of the Clyde’s third round of barking. It sounded closer. I wheeled, set up, shotgun facing that direction.

No sooner had I done that, movement up the incline, through saplings: a black body and the sight of a gobbler coming. The bird bobbed and weaved through ground cover, stalking the setup, and likely the sound of the other turkey. I picked my window of opportunity. The gobbler stepped out, looked. What a beautiful thing. I pulled the trigger. We closed the deal on the ultimate experience in the fall turkey woods.