We all like to watch them, us hunters and even anti-hunters alike. It’s maybe one thing we do agree on.... 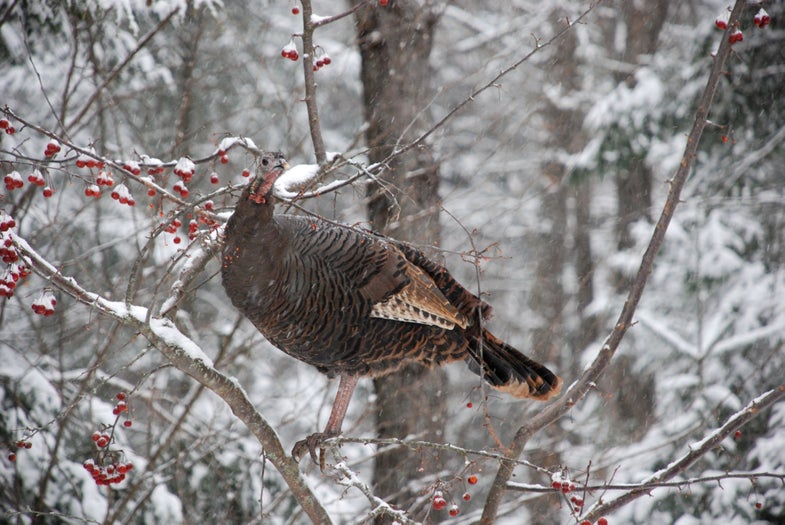 We all like to watch them, us hunters and even anti-hunters alike. It’s maybe one thing we do agree on.

In the Northeast, it’s not uncommon to see large winter turkey flocks hammering seed-covered spots beneath backyard bird feeders. They’re just as likely to run with the chickadees as others of their kind. That’s just the reality these cold-weather days. Since field studies bolster any turkey management effort, it’s cost effective to employ citizens to do the counting.

In New Hampshire for the second year running, citizens are being asked to report sightings of turkey flocks seen from now through March 31, 2010, by filling out a simple electronic survey form posted on the Fish and Game website at www.wildnh.com/turkeysurvey/

Respondents are being asked not report multiple sightings of the same flock, which could obviously skew numbers.

According to NH Fish & Game, this effort bolsters understanding of the abundance and distribution of turkeys during New Hampshire’s challenging winter months. The survey asks participants to report the number of turkeys in the flock; the location where they were seen; the type of habitat the birds were observed in; and what the turkeys were feeding on, such as acorns, beechnuts, seed at birdfeeders, or corn silage.

“For parts of the state, especially eastern and northern New Hampshire, we could benefit by additional sighting reports,” said Ted Walski, Turkey Project Leader at Fish and Game. “This reporting system will allow the public to contribute important information to our understanding of winter turkey status in an inexpensive, efficient and, hopefully, enjoyable way.” Last winter, people responding to the survey reported over 1,500 flocks totaling nearly 24,000 turkeys, and encompassing all areas of the state.

Winter is the best time to census the birds because turkeys gather in large, highly visible flocks at this time of year. States like Michigan and others rely on the same citizen-based data to monitor their bird numbers. Chances are your Snow Belt state does too.

Do you guys participate in such studies where you hang your hat? Do you think this is an effective method of generating population numbers, which ulitmately influences turkey seasons and limits? For those of you up north, are winter turkey flocks at backyard bird feeders as common as they are here in the Northeast? Is that a good thing, wild birds hanging so close to suburban spots?