We have a winner. Bobby Woods of Dante, Virginia has captured the Friction Division at the Wild Turkey Bourbon Grand... 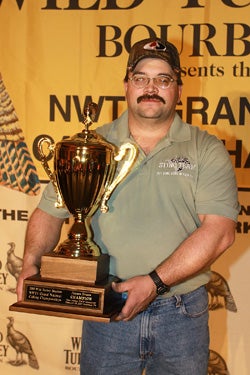 We have a winner. Bobby Woods of Dante, Virginia has captured the Friction Division at the Wild Turkey Bourbon Grand National Turkey Calling Championships. He did so over a field of 24 callers.

“It feels great to win it again; I’m the only caller to do it twice,” said Woods, who also won the Friction Division in 2007. “At first I was nervous, but when I began my first call, the butterflies went away.”

How does it work? In the Friction Division, entrants are asked to perform a series of calls that imitate a single hen. Some of these calls include the yelp, cluck and purr, kee-kee-run, and cutting of an excited hen. A panel of seven judges score each call and the slightest mistake can eliminate a caller from contention.

“Winning a title at the Grand National Turkey Calling Championships is like reaching the summit of a mountain. There is no higher place among the turkey calling’s elite,” said George Thornton, NWTF CEO. “The atmosphere in the room during the trophy presentation is electric. Raising the first-place trophy at these contests means that you have beaten the best callers in the world.”

Stay tuned for more from Nashville here at the Strut Zone.