Waterfowlers have long used jerk cords to impart movement in their floater fakes. Now comes a turkey decoy that offers... 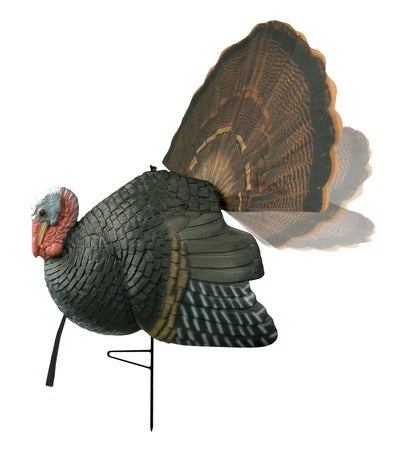 Waterfowlers have long used jerk cords to impart movement in their floater fakes. Now comes a turkey decoy that offers the same thing.

Will Primos says of their new and improved turkey decoy: “Last spring we sent B-Mobile™ to a plastic surgeon and what came back was Killer B™. We updated the paint scheme to bring out more iridescent colors in the body and more red in his head. We gave him glass eyes from a taxidermist that make him so realistic that it looks like he is staring at you. We created a tail fan that can move from full strut to ¾ strut to lying flat. We even updated his posture to make him look more like a strutting gobbler.”

The “Speak the Language” guys gave me a hands-on demonstration at the SHOT Show. You Strut Zoners in?

Maybe over the years some of you have used fishing monofilament to impart movement in your turkey deke’s fan? A few guys in my hunting circles have with success. Now Primos has made this an option by providing a 90-foot pull line which attaches to the B-Mobile™ Silk Fan. You can use it to add strutterlike movement when a live big boy pops up in view, or if you want to pull a hen in and that longbeard.

I also asked the Primos guys if you could slide a real full (or jake) fan in there, and use the pull line. Answer: yes you can.

You can roll this deke up. You can stake it with a hen fake. Stake it with another Killer B™. The combinations are many. It’s like an amped up version of Primos’ B-Mobile™. We’re told all of the Primos Video Team members will have ’em in their vests when they go into the field this spring. Buying into the deal on your end also includes a Mobile™ Series Fan Holder, Mobile™ Series Ground Breaker Decoy Stake, and Carrying Bag.

So is this the difference maker for you guys who’ve seen live gobblers ignore motionless fakes?

There’s a trend in some Western states that involves moving on field strutters while holding real full fans and bellycrawling to hung-up birds, a practice that can be debated as unsafe by some, and hardcore by others. Maybe this tweaking of an old favorite is the perfect compromise? Movement but of the stationary sort. Whaddya think?