I’m a turkey kill stats freak. You too? Like the rest of you no doubt, I obsessively read over in-season … Continued 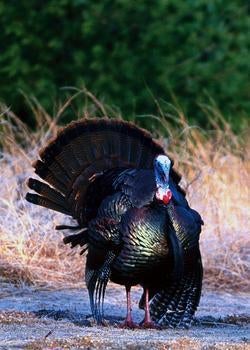 I’m a turkey kill stats freak. You too?

Like the rest of you no doubt, I obsessively read over in-season statistics in the off-season to see location trends, percentages, and to learn even more about the bird we love to hunt. The Granite State just shared their numbers with the OL Strut Zone, and the results are interesting. According to New Hampshire Fish and Game Department Turkey Project biologist Ted Walski, the 2010 spring gobbler season harvest was 3,667 turkeys. Totals included 2,739 adult toms, 909 jakes and 19 bearded hens. NH’s spring gobbler season runs from May 3-31.

The thing that caught my attention was the number of bearded hens: 19. Assuming check-station officials know to accurately eye a bird looking for (1) buff-colored breast feathers, and (2) spurless legs on bearded hens (with rare exceptions), you’d have to say that number is fairly high. The Granite State routinely encourages hunters to pass on bearded (but legal) spring hens, as all potentially nest. Let’s crunch some more numbers.

The next thing I noticed was that at every registration station, the number and percentage of adult gobblers was significantly higher than the take of jakes. Maybe guys are passing on shortbeards? Maybe last year’s hatch (reportedly poor) is to blame? The juvenile/adult harvest ratio was 0.33 to 1.00, or 1 jake to 3 toms. Two-year-old toms made up 1,819 of the gobblers taken (49.9%) – half of the harvest in most Wildlife Management Units. Other age-classes represented in the season total included the aforementioned 909 one-year-olds (24.9%); 727 three-year-olds (19.9%); 172 four-year-olds (4.7%); and 21 five-year-olds (0.6%).

And some of those birds rivaled any Eastern wild turkeys as stats go. The heaviest gobblers taken during the NH spring season were four turkeys that weighed in at 26 pounds; three at 25 pounds; ten at 24 pounds; and 37 turkeys weighed 23 pounds. The longest beard was 13 inches; 8 birds had 11-inch beards. The longest spurs were 1-1/2 inches; two gobblers had spurs that were 1-3/8 inches long.

According to biologist Walski, numerous dry, sunny, warm days in May created favorable hatching conditions for this year’s Live-Free-or-Die State broods. Early summer observations (a random sample of 40 turkey broods from across the state conducted in May/June) recorded an average of 9.2 poults per hen. “Hopefully, this summer will help make up for the below-average hatching success the past two years,” the Turkey Project Leader ended.

Q.1, Strut Zoners: For discussion’s sake, is that registered number of bearded hens okay with you guys? Given the roughly 9 percent poult-per-hen survey count, that’s a conservative 171 potential turkeys taken out of this year’s hatch.

Q.2, SZers: Is a consistent 14% of total season kill over the two-day NH youth hunt too high or low by your estimation? Again, it runs before the regular season starts.

Q.3: You guys starting to see some brood hens with growing poults?