I often call Vermont the most liberal and conservative state in the nation; well at least New England. Lest you... 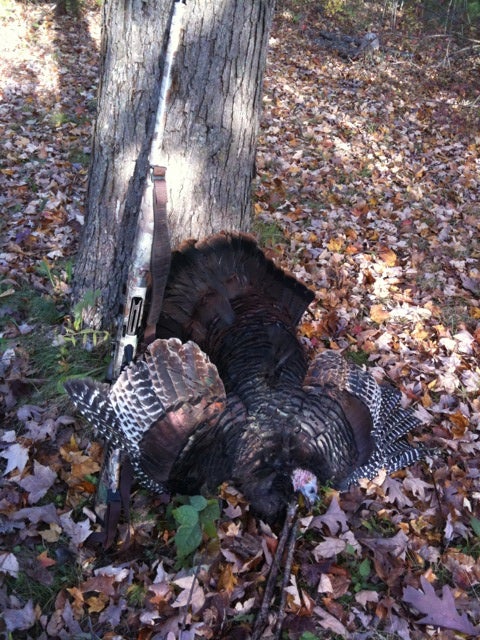 I often call Vermont the most liberal and conservative state in the nation; well at least New England.

Lest you think this is a Yogi Berra-ism (“Baseball is ninety percent mental and the other half is physical”), let me just say this: Vermont’s city-based politics lean toward liberal at times while the rest of the state, especially the rural part, is full of hardcore sportsmen, farming communities and well, lots of wild turkeys. I generalize here, but you get the idea.

My buddy Marc Brown (you remember him from my Maine SZ posts) was set up on a flock of birds, plunked down on his buddy Lucky’s property, location unknown (sound of my throat clearing). Turns out Brownie’s instincts, honed over years of turkey hunting fall and spring, were perfect: he was right in the middle of the flock.

“They were coming to my calling on two different trails, kee-keeing and yelping and it was great,” he enthused post-hunt. “I wasn’t selective and took a bird from the flock when they came into range.”

Pure, he said. No scatter.

In two words: Tagged out.

Have you guys had much luck calling the entire turkey flock in, spring or fall? We saw some success pulling part of a group to us on the Maine fall opener back on Oct. 16. There are some guys in turkey camp who will say only scattering fall flocks will set you up for a call back. Others say you can pull the whole flock in with your calling too. I’ve certainly done both with success, and not done it as effectively on other occasions.

As Yogi Berra might say: “Turkey hunting is ninety percent mental, and the other half is getting it right and wrong.”

Vermont currently has a wild turkey population estimated to be more than 50,000 birds . . . minus one.