I want to first thank head coach Joe Paterno for giving my bud Marc Brown a day off with the... 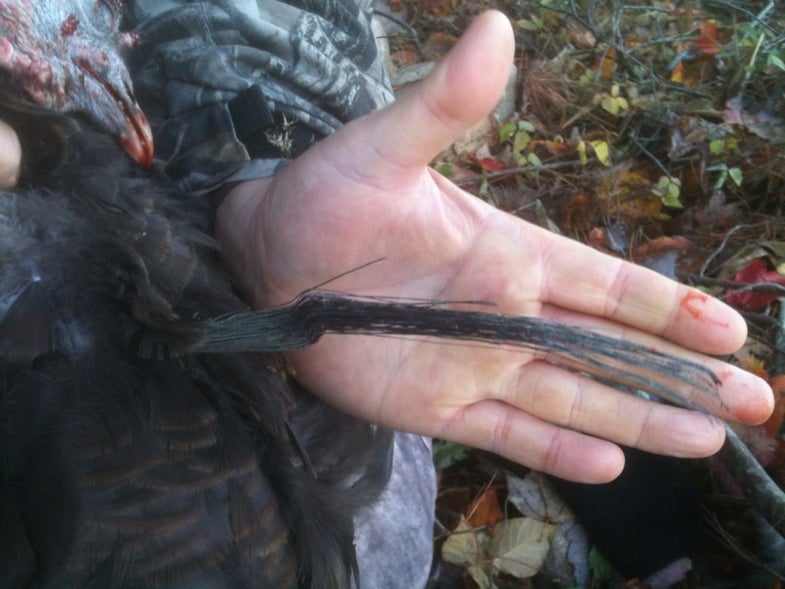 I want to first thank head coach Joe Paterno for giving my bud Marc Brown a day off with the scheduled Penn State football bye week this past Saturday, Oct. 16. That allowed him to sign on for a full day of hunting the Maine shotgun turkey opener, his second love next to Nittany Lion football.

I’d been watching three flocks of turkeys at what I often call my local goose field. One group, which I dubbed the Junkyard Birds (16 total; some super jakes running with the mixed group), preferred to roost in several places, both over the line where we couldn’t hunt (the junkyard with nearby woods and a field), and on our side (in hardwoods and a cut cornfield) where we could. Another late-hatch group numbered nine. Yet another, a super jake and longbeard duo (I passed on the former bird several times that past spring, including the next to last day) occasionally made an appearance, looking like they wished they were invisible.

And yes, I’d been goose hunting the place a little before turkey season arrived, but not lately with turkeys on my mind.

I cut the old Ford’s ignition at 5:40 a.m. while Marc pulled his truck in ten minutes later as I sipped black coffee. We’d said 6 a.m., but you know hardcore hunters. I didn’t sleep much the night before. Good thing, for as we made the walk in, another vehicle pulled up, shined his bright headlights on us, and we flashlighted him back. He pulled away. Timing is everything. Guess somebody else was watching those flocks too.

While the forecast (see our previous SZ post) had called for wind and rain on the opener, only the breezy conditions lasted. Fact is, daybreak was cold but gorgeous as blue sky appeared behind the sketchy gray clouds moving in jagged departing sheets.

Sure enough, honkers flew in (and mallards to the nor’easter flooded field corner), tempting this servant of two masters. I did my best to ignore them, even though four geese circled in range along the edge cover where I sat, Marc 15-20 yards to my right. Not long after I heard walking in the woods behind me, first thinking it was the guy in the vehicle doing an end-around; next thought: turkeys, in the woods, just flown down from hardwoods. Over the next 45 minutes Marc and I cold called. Then the group appeared to Marc’s right, easing into the field on our side. Sweet deal.

I kee-keed; I yelped and clucked. Several birds broke off from the main wad of turkeys, and made their way toward Marc, who called them closer then stopped–one right near the blind with him–and the two or three others moved into his range as I stepped it up with my mouth call. I knew he was thinking about a buddy double (as we’d talked about the fun of it), but we’d also discussed taking the sure shot even if the other guy didn’t have one and the birds were moving away (the rest of the group was, including the super jakes). It’s. All. Good.

Thing is, I was flowing with the outside bird too in the event it swung my way after Marc’s looming trigger pull. One shot came, bird down and flopping; then another volley (some fall turkey hunters like to scatter flocks with such a loud report, fired away from the birds). I stood, looked at him, right thumb up, and hustled to the downed bird–a bearded adult hen (pictured here: it later measured 8 and ½ inches, a true fall turkey trophy).

So after some high fives and a few photos (plus Brownie apologizing for muffing the buddy double to which I punched him on the shoulder, smiling), Marc made his way to the truck and check station. It was now my turn to try for the scattered turkeys to see if I could coax one of the 15 birds left into range by calling them back to the flush site.