After my buddy Marc anchored the fall bearded hen, he offered a second scattering shot in the air to flush... 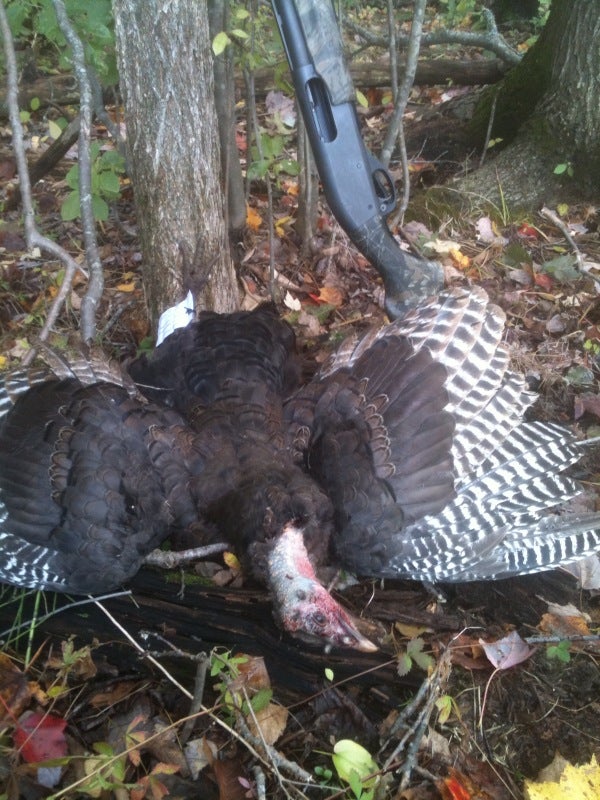 After my buddy Marc anchored the fall bearded hen, he offered a second scattering shot in the air to flush the flock more. Loud, but effective enough. Thanks man. We high-fived again the way a quarterback might a wide receiver after a touchdown pass and reception. He made his slow way across the field (now weighted down with the turkey), across the creek, up the grassy pasture to the parking area alongside the road.

He hadn’t even reached his destination before I’d called a turkey in right behind me (or maybe the bird had just returned to the flush site). I sat just inside the field’s edge cover: five yards into the woods, back against a broad tree, reclining on a seat cushion plunked down on a portable camouflaged chair. Comfort, man. It’s essential.

The cluck was soft, barely audible, but it said: turkey. More footsteps. No shot but the bird was sure enough there.

For the next two hours I pretty much froze in place, mentally willing myself to hang on (honestly it seemed like half that time): shotgun on my left knee, facing toward the field corner hen decoy. All turkeys in this group would eventually ignore it–confirming my longstanding belief that fakes work for plenty of other guys but not me. Then again, maybe I just have Turkey Decoy Location Placement Deficit Syndrome. (I seem to do fine with the goose and duck dekes; could it be wild turkeys are sharper?)

Truth is, I tend not to use turkey decoys as they limit mobility, but in this case my mobility was certainly (necessarily) limited. Yup, TDLPDS, sure enough. They ignored the turkey fake. I of course wanted them to move single file in that direction so that I could pick one out, or at least for one to slip in for a clinching shot. The calling, they seemed interested in. The soft yelps and kee-keeing that came from the other side of me as I called were a bit louder, approaching: turkeys, now more of them.

I’d softly yelp and cluck; I’d kee-kee, and one of the birds would answer; drift off. I heard footsteps, then nothing. Soon another turkey was yelping, louder now, and this went on for awhile: me calling; the occasional bird answering. They were no doubt getting together visually too. It felt like maybe they were about to give me the slip.

And then in a matter of seconds, loud footsteps in the leaves; suddenly they were all surrounding me, several just to the left of my hunched form, shotgun forward. The birds purred (one nearly in my left ear), they yelped, and another bird–an adult hen–made an assembly racket to beat any stage caller in the industry. It was as cool as it gets in the fall turkey woods. But when that starts up, you better act fast. She’s about to pull them all away.

Fifteen turkeys now, many calling. I only needed one to tag out. I cut my eyes that way, eyeballs rotating as much as possible in their sockets. Whether you bow hunt whitetails or blind hunt decoying honkers, you know the deal: only move your eyes until you get the shot you want. I now saw a number of turkeys, all legal in this either-sex fall turkey state. I picked one out, my shotgun flowing as some of the nearby others moved past hardwoods. My bird had the courtesy to look my way. That was the last thing it did.

I stood, a little stiff and a lot happy. And then the rush we hunt for came like a double shot of caffeine. My hands trembled as if this wild turkey were the first I’d ever called in and killed all those years ago. You’d think a twist-tie and Maine transportation tag would be easy to wrap around a skinny turkey leg by now. Not.