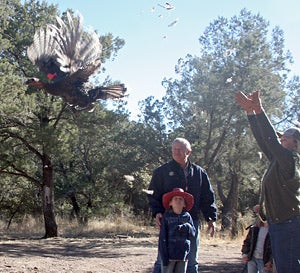 Once located to reliable habitats, the turkeys do the rest. Given time and successful hatches, growth develops exponentially. Hens breed, nest. Broods are raised. Gobblers and hens disperse, and the cycle of management continues.

According to the NWTF, this bird was one of 15 Gould’s trapped in the Coronado National Forest before transferring to Gardner Canyon.

As many of us know, wild turkeys faced an uncertain future through much of the early- to mid-20th century. Trap-and-transfer efforts, by the NWTF and state wildlife agencies, have grown the national wild turkey population to an estimated 7 million birds. About 2.5 million hunters pursue them.

How did this work?

In the 1950s, rocket netting allowed wildlife officials to safely trap, secure and transfer wild turkeys from one location to another (often more suitable) habitat.

What’s your take on the whole trap-and-transfer effort? Have you seen it work in your state over the years? Have you helped in the process? Let us know.

Incidentally, if you haven’t heard, the NWTF’s Annual Convention is underway. Click here for more information.