Nature bats last in Oklahoma where the weather can knock you out of the game in an instant. “If you... 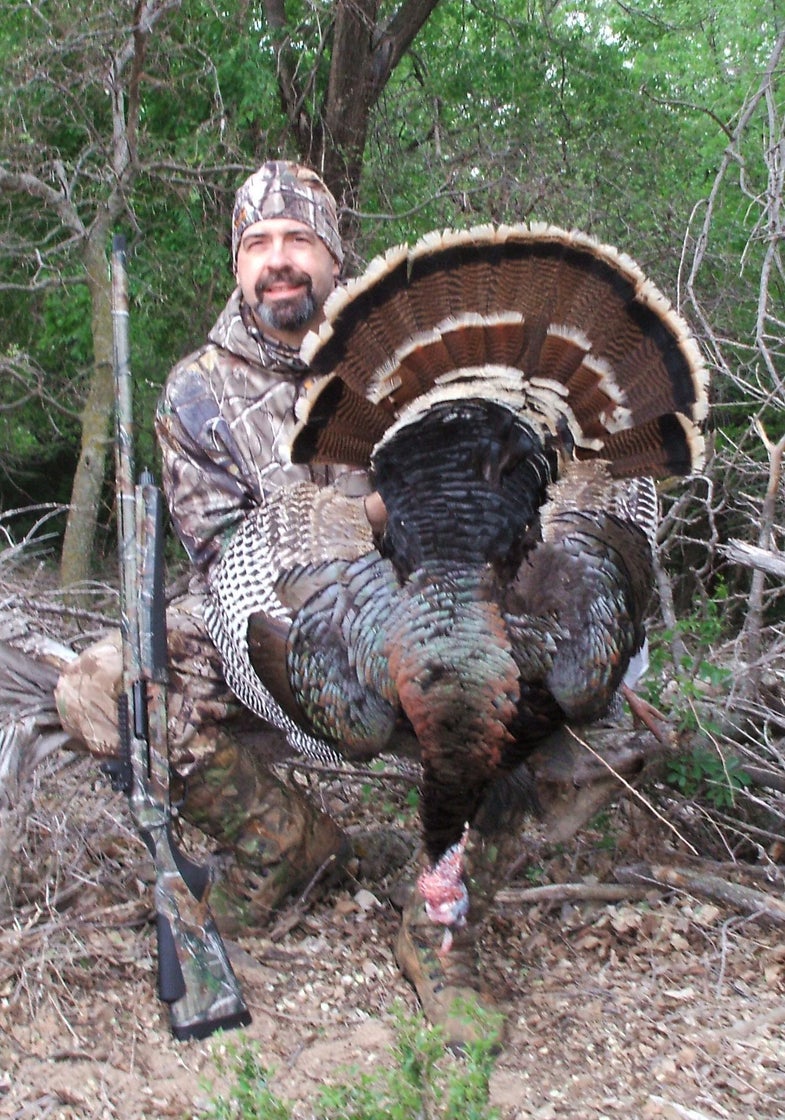 Nature bats last in Oklahoma where the weather can knock you out of the game in an instant. “If you guys hear three honks on the truck horn, come on up,” we were advised in pre-hunt, storm-minded mode. We’d be out early the next morning.

Day 1
Dubbed “Team Jordan” years ago in Texas when we collectively fooled several longbeards into range, good buddy Mike Jordan and I have shared many turkey camps. Jordan had scouted the piece of leased Oklahoma land days before when he arrived with another longtime friend Gary Sefton. We slipped down into the pre-dawn woods, and skirted the pasture’s edge cover where he’d located a big wild turkey flock.

We didn’t wait long to hear some initial gobbling and muted hen yelping just off the far field corner. Then some strange and unidentified banshee bird (or mutant animal) screamed in the woods, moving our way. Owl? Howler monkey? Bigfoot?

The turkeys were roosted above a winding creek. Their yelps and gobbles cut through the rising wind. “Turkeys,” Mike hissed lending reality to my view of multiple birds pitching down out of roost trees. Gobblers fought, strutted, sorted out the pecking order. Hens filtered in too. At once, a wad of them started hustling our way. Game on!

Ready, willing and hopefully able, we watched as hens led the whole group our way. Calming myself, I counted them. If it’s possible to imagine, there were maybe too many legal turkeys in range. Too many? Longbeards waddled in, strutting wing to wing. Jordan had three gobblers in front of him at 20 steps; I had the same number out in front, on my side. Hens shadowed them. No shot.

I waited for Mike’s suggested 1 . . . 2 . . . silent 3 double-shot cue, but it never came. Cutting an eye in the direction of the pasture corner, I saw other turkeys pitch down. Twenty-plus birds wandered our way.
Still, we couldn’t shoot or single out one bird, or two for our limit. We needed separation. The turkeys were too tight, wadded up, both hens and gobblers, all flocked up.

And that’s when the lead hen alarm putted just a handful of steps away. Uh-oh. Hens in her tight group, once surrounding the gobblers in front of us, swung around, and hustled back toward the pasture corner below. Turkeys did that dreaded wing flick and turn to boogie out of there. Gobblers followed them as they drifted: still no shot. That was when one longbeard in the group I watched popped into strut. Two others stepped away. I found the target and pulled the trigger (more on this later). Boom, down, we had a bird.

Advanced scouting and an opportunity at multiple gobblers yielded a nice bird and the promise of more action to come. Not long after the wind really picked up and we made our way out of there. We’d be back.

Stay tuned for more of my Croton Creek Ranch turkey hunt this week on the Strut Zone.