Earlier this year I made a Superbowl bet with OL Content Editor Alex Robinson (a die-hard Packers fan). I lost... 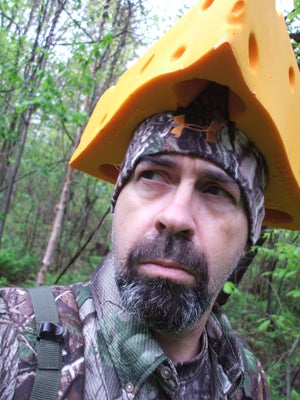 Earlier this year I made a Superbowl bet with OL Content Editor Alex Robinson (a die-hard Packers fan). I lost that bet, and was forced to wear a cheesehead during my turkey season.

For those of you unfamiliar with the infamous cheesehead, Green Bay Packers backers sport ’em on game day. For all I know they wear them to weddings, funerals and even to bed. As for this Pittsburgh Steelers fan making good on the lost bet, it went down like this . . .

My buddy Nessl threatened to bring one to Georgia turkey camp back in late March (he’s married to a Wisconsin girl and Packers fan). I dodged that bullet when he later muttered something about “not enough room in my checked bag for that.” Other guys in my turkey hunting circle offered to send one, but then jump-started spring turkey season and that was that. They forgot. Hey, maybe everybody would.

Not a chance. Outdoor Life’s Gerry Bethge and Robinson both reminded me after the delayed event failed to make the “Strut Zone” turkey hunting radar.

And so I conducted an online search. And so I chose my seller. And so I forked over 20 hard-earned dollars and change. And so the thing arrived in a huge box, adding to the concern. And so I put the thing on my head. And unintentionally scared the dogs. And found a place to hide it until I wore it turkey hunting. And so I did.

And I did not kill a turkey with it on my head. Surprised? Me neither. And while I learned that sporting one will not help you tag the most paranoid bird on the planet, it can provide other hunting options:
It’s soft. Ample. Form-fitting.

A Green Bay Packers cheesehead makes a fairly decent setup cushion and/or backrest against a broad tree trunk, assuming of course you cover the yellow-orange prop with camouflage material. Or no camo at all. Remember that this fall during deer firearms season.

A cheesehead also offers pillow support for mid-morning naps if you’re field hunting out of a blind with staked decoys at optimal range.

Hmm, what else? My wife, also a longtime Steelers fan, suggested I let one of our English setters have their way with it (after they get over the inherent fear of such a strange bright object in our log cabin). Likely our toothy Luna girl, who still has just a little puppy left in her, will get the nod there.