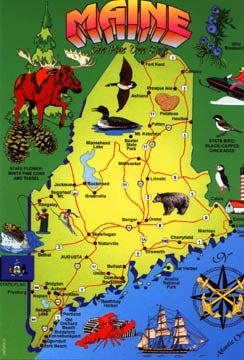 Georgia. Oklahoma. Vermont. Wind. Rain. Hail. Tornado warnings. Delayed flights (I boarded a plane in D.C. that had just left St. Louis before the tornado hit there). A foggy-headed 2:30 a.m. rising for a road-trip run to Vermont for their recent opener (some old snow still hangs on in the mountains). Nothing can keep me from my appointed Strut Zone rounds. Hey friends, we’ll sleep this summer, right?

Next stop Maine, where I make my home base when not traveling to turkey hunt. I “slept in” until 4 a.m. for our Pine Tree State opener, woke to my duck quacking iPhone alarm (foreshadowing it turns out), turned the truck’s ignition and rolled down the dirt driveway from my cabin to asphalt.

After some pleasant miles as my heater fired up (frosty fields awaited me), a red truck said that some guy was hunting the woods north of the town dump. A white pickup told me someone (later I learned it was a buddy’s new wheels) was hunting the farm where we’d been watching two full-fan strutters. These two strikes against me had yours truly taking some pitches as I drove up the road in the other direction.

My old Ford truck wheeled along in the dark, headlights leading the way. Country music set the mood. The weather report talked of a cool and sunny day ahead and confirmed the good feeling. Perfect. Even better: Nobody was parked at my preferred destination.

The long walk in was pleasant enough, but the silence stayed just that. Even a barred owl, silhouetted against the pale sky, failed to pull shock gobbles from birds I just knew were in there. Everything I heard was off the property. Plan B: sit and listen. I did that until 7 a.m., then left that setup for a little walk. Hmm. Time to make something happen.

I crossed several fields, slipped into the woods, down a little ridge, and settled in above a creek bottom flanking a swamp and hillside below a bigger saddle. Initially, my cold calling did nothing. I’d had a conversation with my buddy Scott Basehore (the custom callmaker with numerous prestigious awards on his resume over the years), and told him my goal was to kill a gobbler this season using one of his fine box calls.

I stroked the box: two gobblers fired back on the far hillside. Nice. I waited them out, called again. They hammered back, still in the same place. This might take some time. Been there?

Minutes can seem like hours in the turkey woods and hours seem like minutes (you guys know what I mean), so when I hit the box call again to silence, I thought the game was over, or that they were silently coming. I made ready. Just then hard gobbling came from my extreme right. I couldn’t move. Footsteps in the leaves. I strained my eyes: hen, hen, huge longbeard, flanking the bench; then another longbeard and a jake, all coming but wary. More gobbling. Then alarm putting. At that they turned and I had no shot at a longbeard as the hens and hefty gobbler slipped up the hill. The other longbeard and jake drifted back though, and then down the hill away from the group. This was getting interesting.

I waited. Waited some more. Yelped. A bird hammered back just over the rise. More waiting. Gun getting heavy. Time passed. Gobblers gone? My heart sunk like a stone in a deep pond of regret only turkey hunters know. Patience, I thought. Be patient. Still, I felt sick like I’d blown it.

The woods were quiet, far from the rowdy gobbling that had preceded it. Far off, I heard geese moving overhead. Wood ducks in the nearby swamp made their crazy calling, dumping in. An approaching mallard winged toward my position, quacking the whole way . . . that was when the two birds on the far hillside lit it up with shock gobbling. I made a mental note to pass on at least one mallard duck when waterfowling this fall, and readjusted my attitude.

I yelped, and the two original gobblers on the far hillside ripped back at me. I laid on some silence. Some more quiet stuff. I yelped again on the Basehore box and saw them coming hard. Gun up, I waited. Waited some more. That was when I saw the two turkeys steadily walking along the edge of the bench, looking, studying my position. I’d have seconds to pull this off. I picked a broad oak trunk in the path of the lead gobbler, and waited for the bird to pass behind the tree. I flowed, got on the shooting lane, waited. The turkey stepped out: I shot, bird down. His jake buddy hustled away. Bird down, but head up: I shot again and it was over.

Weight of my opening day Maine bird? Good sized, for sure (we’re making a turkey chili tonight). Spurs: not my biggest. Beard: long enough for me. I texted my callmaker buddy almost immediately: Hey Scott. Some might call my Maine opening day gobbler “average,” but it’s my current favorite since I did it with one of your box calls. Thanks!