Estimates suggest that about 70,000 wild turkeys live in southern Ontario. At least 40 or 50 are fighting back, a... 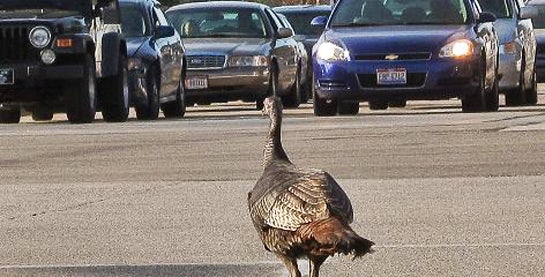 Estimates suggest that about 70,000 wild turkeys live in southern Ontario. At least 40 or 50 are fighting back, a month now after the spring turkey season closed there in May.

According to The Toronto Sun, wild turkeys are attacking Ontario drivers. Barrie city councillor John Brassard fears residents may come to possible harm if it continues. Why? His vehicle was a recent target. From the article:

_”They attacked my car,” he said. “I stopped, honked my horn, but they started pecking at the grill.”__

Brassard said he was able to drive away without further damage.

“It’s getting to the point of being ridiculous,” Brassard said. “Something has got to be done or somebody is going to be hurt. People are getting out of their cars and the turkeys are chasing them back.”

It seems he’s not alone as concern goes . . . the report presents further evidence of the growing challenge and an effort to thwart the advances made by these rogue birds._

What’s being done? The Toronto paper also revealed that:
_
Coun. Alex Nuttall raised this matter at a council meeting . . . but was told by city staff that wild turkeys are a protected species and little can be done [outside of hunting seasons, of course].

Nuttall said that besides Brassard, his mother and a friend have also had their vehicles attacked by wild turkeys . . .

“It’s a very bizarre situation, because it’s happening consistently,” Nuttall said. He estimates 40 or 50 wild turkeys are in the area.

“They are really quite aggressive,” said Mayor Jeff Lehman.

Brassard said he saw more wild turkeys . . . and videotaped an encounter with a woman who tried to chase them off the road.

Residents are not amused.

“It’s not funny anymore. It was cute in the beginning,” Brassard said._

Any advice for our neighbors to the north, Strut Zoners?

Make sure to take care if you’re driving through southern Ontario this holiday weekend.