Suburban Man Trapped in His House By a Turkey

As turkey hunters, we try hard to find birds. In the suburbs, some can’t avoid them. We wear camouflage and... 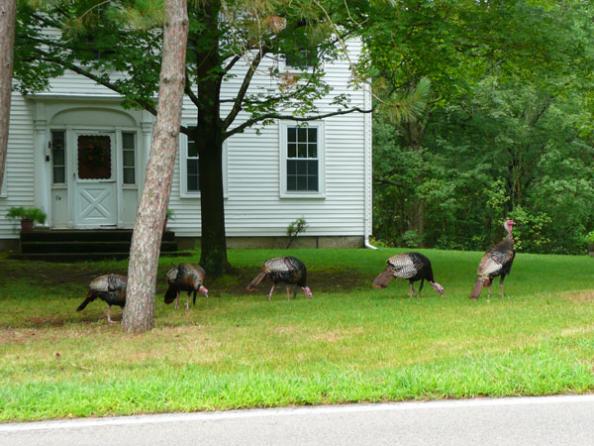 As turkey hunters, we try hard to find birds. In the suburbs, some can’t avoid them.

We wear camouflage and keep movements to a minimum in our effort to kill one. Something as simple as moving a shotgun or bow for the clinching shot can put these paranoid birds on red alert. Alarm putting and a swift departure follows.

But this isn’t so in the highly-populated Northeastern suburbs where turkey flocks are causing trouble, often among a non-hunting population that knows little of the bird’s tendencies. It’s reported that in Massachusetts, one resident, armed with an iPhone, recently attempted to scare a wild turkey away from his door by making sounds with the hand-held device.

“It’s been really bad,” said Harmony Hill’s Sean Roche. “The biggest (male) turkey was in front of my back door the other day, and I couldn’t get out of the house. I tried scaring it away by making noises with my iPhone, but that didn’t work. Eventually, I had to use my dogs to scare it away, which I hate to do.” Roche indicated the turkeys show little fear of humans or cars. “They have been causing commotion in the Washington/Harmony Hill intersection for over a month,” Roche stated.

But this isn’t a new problem, and in the past some Eastern suburbanites have taken more forceful, illegal actions. The New York Post recently reported: “Several years ago, a Staten Island man was busted for allegedly firing bottle rockets at a group of the birds to drive them off his property.” As you might guess, it didn’t work. Earlier this month a motorist deliberately drove through a flock of turkeys. “This was bound to happen,” witness Anthony J. Carro reported, stating the turkeys sometimes hang out on his front lawn. “The roadways are so congested. Everybody’s in a rush . . .” Except the big birds.

Too many turkeys is a good problem to have, right?