Most turkey hunters are slackers when it comes to scouting their hunting land before the season opens. The prevailing thought... 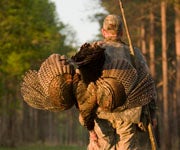 Most turkey hunters are slackers when it comes to scouting their hunting land before the season opens.

The prevailing thought is “the birds are either there or they aren’t–but they usually are, so why bother scouting?” A great strategy if you’re hunting one small piece of land, perhaps, but if you have multiple properties or one extremely large tract available, scouting is critical to consistent success. Here’s how to do it…

1) Time Your Scouting While late-fall and winter observations of turkeys can be beneficial, cold-weather flocks will alter their feeding patterns as turkey season draws near and the warming weather brings newer food sources. By spring, hardwoods will become largely devoid of acorns, so birds will focus more on greening fields and plants in low, watery areas, such as along creeks or swamp edges. To nail down where birds will be, serious scouting doesn’t need to occur any earlier than two to three weeks before opening day. Birds will still typically be flocked up, but their location will remain fairly constant.

2) Snap a Picture Those same trail cameras you use to identify whitetails before deer season work just as well for pinpointing where turkeys are hanging out. Set them up on food plots and fields and along logging trails and open hardwood ridges to figure out where flocks lounge and feed during the day.

Look closely at the makeup of flocks, including the ones with the most gobblers, and determine actual bird activity. Are gobblers strutting in front of hens? Are they fighting with each other? All of this can help you determine how to approach birds in the first days and weeks of the season. Cameras with plot-watching features (ones that snap a picture at regular intervals regardless of -whether or not they’re triggered by movement) are ideal, as they can monitor a larger open area, providing vital information on when turkeys arrive at a field, where they enter it, and how long they hang out there.

3) Boots on the Ground Of course, just checking your camera won’t replace actual time spent on the ground observing turkeys. But there’s a right way and a wrong way to do this. With the exception of a locator call, leave the mouth yelpers, gobbler shakers, slates, and box calls at home. This is no time to educate birds. Grab a quality binocular, camo up so you can blend into the scenery, and put on a comfortable pair of boots for walking. Get out there early and plan to spend the first half of the day looking and listening.

4) Be Early Whether you hunt a mountainous area or relatively flat ground, get to the highest point on the property, or a spot that affords a clear line for sound to travel, in order to hear as far as you can. Pick a clear, calm morning and get there before light, since turkeys are most vocal from the roost just before flying down. In the days leading up to the opener, where they roost is the most critical intel you can obtain.

5) Midday Scouting Because you’re likely to spook gobbers and hens trying to get together, avoid traipsing through your hunting area at first light. Aside from listening, first light is when you want to just sit and watch. If your listening post is on a large field edge, all the better. Sit in the shadows and glass any turkeys that appear in the open. As the sun climbs, walk fields inside the tree line, stopping to look and listen periodically. Walk logging trails and throw out the occasional crow call to see if you can entice a shock gobble. A lot of hunters spend time looking for tracks, feathers, and droppings, but don’t get overly excited about those. Tracks and feathers usually indicate only where turkeys have been, not where they’ll be when you’re set up with gun or bow in hand.

6) Break It Down When you scout, listen for more than just gobbling. Break down every turkey sound you hear. Because jakes tend to gobble a lot from the roost, you’ll want to try to determine if the gobble you’re hearing is a young bird or at least a 2-year-old. Does the gobble choke off at the end or sound clumsy? If so, it’s likely a jake. Using an aerial image of the property, mark every spot where you hear a bird and note whether it sounds mature or not. Refer to that map often, particularly when the woods grow quiet and you need to force the action.