Some springtime longbeards take their marching orders from the boss hen. At times, the only way to get him in... 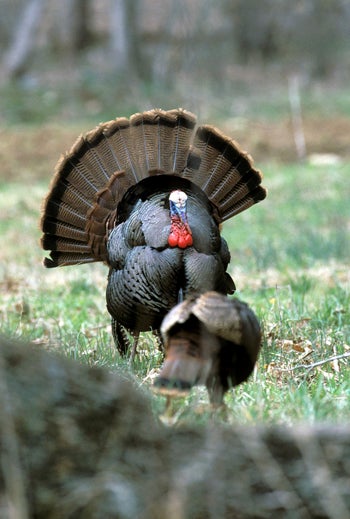 Some springtime longbeards take their marching orders from the boss hen. At times, the only way to get him in range is to call her in.

For starters, you try to play fair. You float some soft, sweet yelps in an attempt to call that gobbler to you right off the roost. He flies down. Each time you get him fired up, the boss hen strides in out of nowhere, and intercepts your bearded bird of future bragging rights. You’ve only got one choice now: call her in too.

To pull this off, you’ve got to think like a turkey. Actually, you have to think like two turkeys: the boss hen and the gobbler running with her. That gobbler wants to breed that boss hen. He’s biding his time, strutting his stuff. He’s that big-racked buck on a doe’s trail last season. Mostly he lives with a single-minded purpose.

That boss hen is focused too. She’s established a home ground now, with nesting on her mind. She’s aware of other turkeys in the area, and will contest a new hen’s presence, even if it’s just a vocalization.

Start with soft calling. If she increases volume, do the same. Mock her, note for note. If she aggressively calls back at you, dish it right back in her direction. If she goes soft and sweet, do the same. Pull her to your setup position. But watch for that trailing strutter’s fan. When he’s in range, cluck to get that head and neck up, then close the deal.

Ever call in a hen to kill a tom?