As tough and frustrating as turkey hunting can be with a shotgun, some hunters choose to add even more stress... 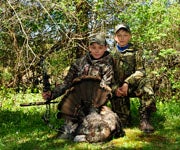 As tough and frustrating as turkey hunting can be with a shotgun, some hunters choose to add even more stress and frustration to their lives by trying to take down a gobbler with stick and string. Those who have to be politically correct might say that such a hunter strives to pursue the sport at the most demanding and purest levels. Others might describe such a hunter as insane, a fool, or crazy.

One such hunter who is “crazy” about hunting, fishing or anything outdoors related is Ryan Ruef of Massachusetts. A couple of years ago Ryan, 13, and his brother Andrew, 11, started accompanying their dad, Gary, on deer, pheasant and turkey hunts in Massachusetts and Connecticut. These adventures were great experiences for the boys, but after three years of tagging along with dad, they came to realize that hunters go home with unfilled tags more often than they do with a trophy.

This past fall, Ryan was old enough to take to the woods with his bow in hand. He logged many hours sitting next to his dad and his brother in their tree stands. The time spent on the archery range and in the tree stands almost paid off when Ryan got a shot at a nice 8-point buck. Unfortunately the arrow deflected off a twig and missed its mark. A few days later, on his dad’s advice, he passed up a 10-yard chip shot on a large black bear. (Was it the cost of the taxidermy bill, Gary?) So, as Ryan’s first official hunting season ended, he experienced his own harvest tags burning holes in his pocket.

Ryan and Andrew joined a youth archery team at western Massachusetts’ Lee Sportsman’s Association in the offseason, where they continued to shoot their bows religiously. Both boys saw the positive results of dedication and practice by winning trophies in their age divisions at some of the league tournaments.

Fast forward to this spring. Ryan still practiced shooting his bow every day in anticipation of the spring turkey season. Through the efforts of the Massachusetts Division of Fish and Wildlife and the Lee Sportsman’s Association, a special youth turkey hunt was scheduled for April 28. Ryan told his dad he was confident that he could hit a gobbler out to 35 yards with his PSE bow. Gary didn’t disagree, but wisely advised that he should limit his effective range to 20 yards.

On the day of the youth hunt, Ryan, Andrew and their dad set up in a pop-up blind along the edge of a field. They positioned a jake and hen decoys 15 yards in front of the blind. As the sun started to break the horizon, they were greeted by a series of raucous gobbles from four toms and a group of jakes. When the birds left the roost, it was evident that the toms had hens with them — they showed no interest in Gary or Ryan’s calls, except for an occasional gobble. The trio continued to call, hoping to convince one of the toms to head their way.

Over an hour later, Ryan spotted movement to the right of the blind. Two jakes had separated from the mature toms and snuck in to the Ruef’s setup in an attempt to steal away with a hen. When the two jakes started to make their way toward the decoys, Ryan got into position for a shot and ranged the birds at 27 yards — clearly farther than dad’s expressed limit of 20 yards, but still less than Ryan’s self-imposed range of 35 yards.

Now, picture the three of them stuffed together like a can of sardines in a blind designed for one person. Andrew was the videographer, and Gary, the safety officer, coach, production director, and most importantly, mentor — both trying to remain motionless and quiet so Ryan could make a shot with the bow.

Ryan came to full draw and settled his 25-yard pin just a little high on the nervous bird standing 27 yards away. He released and made a perfect shot on the tom! The little pop-up blind instantly became a party tent as the three Ruef’s celebrated their shared victory. It was a fantastic experience shared by a father and his two sons, and will always hold a special place in each of their memories.

Ryan’s first bow kill turkey weighed 14 pounds and had a two-inch beard. It also bears mentioning that the bird was called in with a box call that Ryan had made in his wood shop class at school. He’s already taking orders for his custom made box call and plans to name it “The Ruefinator.”

Is this kid crazy? He sure is, and as hunters, we should all love it!
_
Editor’s Note: The Massachusetts Youth Turkey hunt was a great success for members of the Lee and Stockbridge, Massachusetts Sportsmen’s Clubs. The Lee Club had 13 kids participate and they ended up taking 10 birds, while the Stockbridge Club had 10 kids participate and they took four birds. The Massachusetts Division of Fish and Wildlife deserves a special thank you for giving these kids an opportunity to experience one of the many great adventures that hunting and fishing provide._