While it’s not uncommon to call in coyotes around while making turkey calls – raise your hand if you have;... 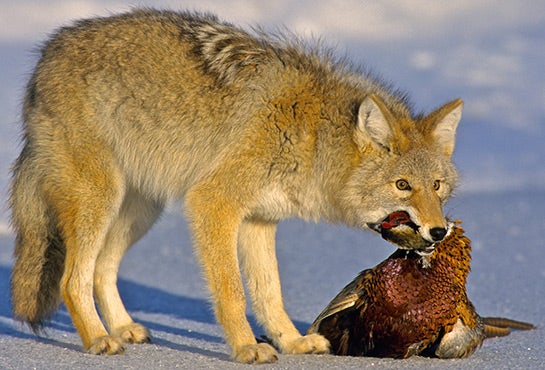 While it’s not uncommon to call in coyotes around while making turkey calls – raise your hand if you have; mine’s up – it’s fairly rare to have one grab you in a case of mistaken identity.

Until now, that is. A Maine hunter had an encounter this week he’ll not soon forget: a coyote attacked and bit him on the right arm.

The turkey hunter, Bill Robinson, was fully camouflaged of course, hiding in cover. He was running a mouth call, while hunting Washington County near Cooper, according to reports.

It was right after dawn so the light was just coming on. The ‘yote came along the field edge toward where Robinson was hidden near a thick spruce tree.

When the toothsome predator got close, it attacked Robinson, biting through “four layers – a heavy jacket, a sweatshirt, a long-sleeve shirt and a T-shirt” according to the story.

Tooth marks neatly punctured each layer of clothing and his arm. Did the coyote hang around? Did he shoot it? Did he ever get a gobbler?

Click the link for a rundown of the worst coyote attacks.