Turkey Hunting Tips: How to Kill Mid-Season and Late-Season Gobblers

It ain’t over until the fat gobbler fries . . . Spring turkey seasons continue until the end of the … Continued 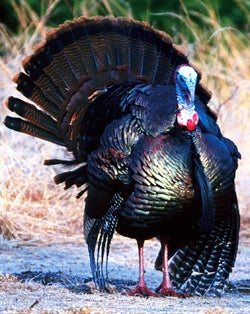 It ain’t over until the fat gobbler fries . . .

Spring turkey seasons continue until the end of the month in many northern locations. Maine’s, the latest option in the country, runs until noon on Saturday, June 2. Try these tactics to kill a gobbler up north this season.

Mid-Season Toms
Some nesting may have started; some gobblers may have been killed. Flock configurations are shifting. Some gobblers are still on the move, looking for company. Be there when they are. Scouting to see shifts in breeding ranges is important throughout the season.

Roll the Dice: Don’t give up on areas where gobblers are still running with hens. Keep at it and one day you might find that turkey alone with the girl turkeys sitting on eggs.

Late-Season Gobblers
Hens are nesting. Male turkeys are sometimes looking for other gobblers now as summer approaches and the urge to breed fades. Use gobbler yelps and gobbles to pull them in.

Then there’s the young hen factor. Biology tells us young hens, if they breed, do so later and often quit efforts sooner. Occasionally you’ll see a young hen with a gobbler that hasn’t been there that season. That’s the turkey you want to target at the wire. Get between the gobbler and the hen before fly-down after watching them fly up the night before. When they hit the ground, with any luck she’ll call him to you or you’ll do that yourself.

Calling Trick: I shot a New Hampshire Memorial Day three-bearded gobbler one season after finding it standing alone in a plowed field. A series of gobbler yelps pulled it in at 100 yards from that open space, and into the woods where I sat camouflaged with a shotgun.

Can you say grilled turkey breast?
_
_Photo by NWTF media